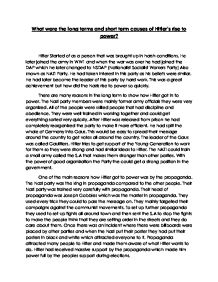 What were the long terms and short term causes of Hitlers rise to power?

What were the long terms and short term causes of Hitler’s rise to power?

Hitler Started of as a person that was brought up in harsh conditions. He later joined the army in WW1 and when the war was over he had joined the DAP which he later changed to NSDAP (Nationalist Socialist Workers Party) Also known as NAZI Party. He had taken interest in this party as his beliefs were similar. He had later become the leader of this party by hard work. This was a great achievement but how did the Nazis rise to power so quickly.

There are many reasons in the long term to show how Hitler got in to power. The Nazi party members were mainly former army officials they were very organized. All of the people were skilled people that had discipline and obedience. They were well trained in working together and could get everything sorted very quickly. After Hitler was released from prison he had completely reorganized the party to make it more efficient. He had split the whole of Germany into Gaus. This would be easy to spread their message around the country to get votes all around the country. The leader of the Gaus was called Gaulitiers. Hitler tries to get support of the Young Generation to work for them so they were strong and had similar ideas to Hitler. The NAZI could train a small army called the S.A that makes them stronger than other parties. With the power of good organization the Party the could get a strong position in the government.

One of the main reasons how Hitler got to power was by the propaganda. The Nazi party was the king in propaganda compared to the other people. Their Nazi party was trained very carefully with propaganda. Their head of propaganda was Joseph Gobbles which was the master in propaganda. They used every trick they could to pass the message on. They mainly targeted their campaigns against the communist movements. To set up further propaganda they used to set up fights all around town and then sent the S.A to stop the fights to make the people think that they are setting order in the streets and they do care about them. Once there was an incident where there were billboards were placed by other parties and when the Nazi put their poster they had put their posters in black and white which attracted everyone to It. Propaganda attracted many people to Hitler and made them aware of what Hitler wants to do. Hitler had received massive support by the propaganda which made him power full by the peoples support during elections.

The Nazi party was very flexible with their ideas. IF they had used a statement and projected and idea in one of their speeches or rallies and the next day for example the industrialists were alarmed by this idea they would completely remove their idea from the campaign and they would never use this idea in any of their campaigns. If this kept happening they would leave all new ideas and would go back to their basic ideas about making Germany great again or getting rid of the communists. Their main objective was to get every class on their side.

The use of new technology in his campaign made him look more powerful and clever. The Radio had just been introduced at the time and Hitler used the radio to spread his message all around Germany. Almost every town and village in Germany knew about Hitler and his beliefs and movement. There were many villages all around Germany that knew about Hitler, voted for Hitler but had never even seen him before. Hitler started to travel around Germany in a Plane. He went to cities and villages quickly to give his speeches. Flying over in planes gave the people a huge morale boost and gave them the excitement of seeing Hitler. The people started to like him and think he was great. Traveling around in planes made it Hitler to travel around Germany faster and he could visit about 4 to 5 rallies a day and give his speeches. Hitler posted large posters; did huge parades and everything was well organized and spread his message all around clearly. This got him many people on his side to make him powerful.

Hitler with all the propaganda and campaigns and parades was called a superman between the Germany People. Hitler became a great idol in their eyes. Every poster that was displayed was shown of Hitler’s Strong Personality and how great he was. He gave great speeches and as he did many speeches his skill improved and attracted many people on his side. Hitler might have said that did not even make sense but the way he told his speeches attracted the people towards him. The people loved everything he said and were hypnotized in believing he was right. Hitler always wanted to look with a strong and a great personality in the public and refused to wear glasses. He had all his speeches printed in 12mm writing so he could read without glasses when talking in public. Hitler was the Nazi trump card and their last hope to victory.

Hitler had promised every community (except Jews and communists) and class something. He needed everyone’s votes to get to power and destroy the government. Hitler had promised the working class with jobs during the Great Depression. The middle class were hit very hard by the depression and needed to get back all the money they lost in their savings and investments. The Nazi party promised the middle class protection from the communists taking over and promised to return their old lifestyle. The upper class only feared one thing and that was by the communist taking over and all their wealth would be divided. The Nazi party mainly focused their campaigns against the communists and upper class members such as industrialists were targeted. The Party gave them protection from the communists. Hitler had basically promised everyone everything and got many people on his side and increased his power.

The main thing that made Hitler’s life easier was that the other parties were not as strong as them. The other parties underestimated the Nazi’s work. The Nazi party was not counted so important as they thought that the Nazi beliefs were too extreme and the people would ignore what they said. The Social Democrats the current government thought that they were a minor party and didn’t have any chance in getting enough votes to destroy the government. Especially the Social Democrats didn’t care as much as their votes stayed pretty much consistent. They mainly all fought against themselves rather than the Nazi’s.

All these reasons were in the long run for Hitler’s rise to power. There are some cases where Hitler suddenly rose to power. The Wall Street crash happened on 29th October 1929 and suddenly the Germany Economy collapsed. If the country had Economic instability then there would be political instability because the people would think that the government was not able to solve the problems. IF there is Political and Economical Instability there is higher support of extremist parties like the Nazis. This was Hitler’s golden moment he had this time to get into power. The Nazis had setup many campaigns and Rallies all around Germany again. Hitler had started to include the unemployed and started to campaign against the communists more. Hitler had started to get votes quickly by people had a large portion of seats in the Reichstag.  The Depression made him get into power quickly.

In 1933 Hitler’s votes started to go down. The Economic crisis was starting to improve. The political side still had some problems. Hindenburg the president had started to weaken the government by using Article 48 of the constitution whenever he needed and kept changing chancellors. During that time Heinrich Bruning was the chancellor and to get a large portion of the votes the other parties refused to join up with his party (Center Party). He had convinced Hindenburg to use Article 48 to pass laws for him without going through the Reichstag. Von Papen becomes Chancellor in 1932 and convinces Hindenburg to use Article 48 more to go against democracy.  Later Kurt Von Schleicher comes in 1932 and he hates the democratic system and convinces Hindenburg to remove Von Papen as Chancellor and put him on instead.

Hitler had mainly risen by the Great Depression. After the Wall Street Crash he had a good reason to convey to the people that the current government wasn’t working properly. With all the propaganda and the image that was created of Hitler made him very strong in the Long run. His votes had increased rapidly by all this and the main spark to his power was when Hindenburg decided to make him Chancellor.