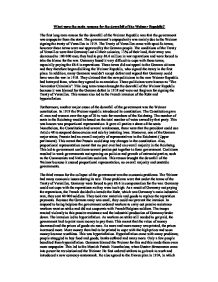 What were the main reasons for the downfall of the Weimar Republic?

What were the main reasons for the downfall of the Weimar Republic? The first long term reason for the downfall of the Weimar Republic was that the government was unpopular from the start. The government's unpopularity was mainly due to the Weimar signing the treaty of Versailles in 1919. The Treaty of Versailles came with specific terms; however these terms were not approved by the German people. The conditions of the Treaty of Versailles were that Germany lost all their colonies, 13% of their land, their army was decreased to 100 000 men, they had to pay �6.6 million in war reparations and were forced to take the blame for the war. Germany found it very difficult to cope with these terms, especially paying the �6.6 in reparations. These terms did not appeal to the German citizens and they therefore began disliking the Weimar Republic, who signed the treaty in the first place. In addition, many Germans wouldn't accept defeat and argued that Germany could have won the war in 1918. They claimed that the new politicians in the new Weimar Republic had betrayed them, when they agreed to an armistice. These politicians were known as "The November Criminals". This long term reason brought the downfall of the Weimar Republic because it was blamed for the German defeat in 1918 and were not forgiven for signing the Treaty of Versailles. ...read more.

The troops reacted violently to this passive resistance and the industrial production of Germany broke down. The invasion led to hyperinflation. As workers on strike still needed to get paid, the government had to print more money to pay them. This meant that the value of money decreased and the prices of goods etc rose. As more and more money was printed, the prices increased more. More money then had to be printed to cope with the high prices and soon money became worthless. This was hyperinflation. Hyperinflation came with many problems; people struggled to buy food and goods, banks suffered and many more. Only a few people benefited from hyperinflation. Germans blamed the Weimar for this and this made them even more unpopular. This led to the Munich Putsch. Nonetheless, when Gustav Stresemann came into power he revolutionized the Weimar. He first ordered strikers to go back to work and introduced a new currency-rentenmark. He also agreed to the Dawes plan in 1924, in which USA lent Germany 800 gold million marks, to help pay the reparations. The next 6 years were called the "Golden age". However in 1929 the Wall Street Crash occurred. This was when USA banks went bankrupt and could not lend money to Germany anymore. As Germany became too dependant on USA the immediate loss of money led to the Great Depression, where people lost jobs. ...read more.

They also raised wages of public officials, but this made the situation even more difficult and so therefore they decreased the benefits of unemployed people. These policies resulted in other political parties leaving the coalition. This cause brought the downfall of the Weimar republic because it led to it not being able to pay the USA loans, become more unpopular with the German people due to it raising taxes etc and loosing coalitions. In conclusion, after considering all the evidence, I think the main reason for the collapse of the Weimar republic was that the government was unpopular from the start. I think this because the government signed the Treaty of Versailles. From then on German citizens despised the Weimar republic as they did not agree with the harsh terms of the treaty of Versailles. The Treaty of Versailles led to all the other reasons for the downfall of the Weimar republic. The terms of the Treaty were not approved by the German people and hence they blamed the government for signing it. Since then all the issued faced by the government were somehow caused by the treaty and were made even more difficult by the unpopularity of it. However, the economic problems was also a main reason for the downfall of the Weimar, as it led to hyperinflation etc, but the unpopularity of the government was more significant as it was a long term cause. ...read more.