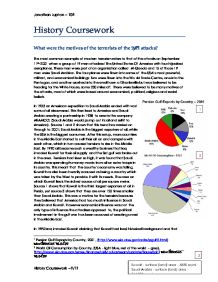 What were the motives of the attackers of 9/11

History Coursework What were the motives of the terrorists of the 9/11 attacks? The most common example of modern terrorism refers to that of the attacks on September 11th 2001 when a group of 19 men attacked The United States Of America with four hijacked aeroplanes. These men were part of an organisation called Al-Qaeda and 15 of those 19 men were Saudi Arabian. The four planes were flown into some of the USA's most powerful, militant, and economical buildings: Two were flown into the World Trade Centre, one into the Pentagon, and another crashed into the small town of Shanksville but was believed to be heading for the White House, some 230 miles off. There were believed to be many motives of the attacks, most of which were based around economical, political, religious and social beliefs. In 1933 an American expedition to Saudi Arabia ended with vast sums of oil discovered. This then lead to America and Saudi Arabia creating a partnership in 1938 to create the company ARAMCO; (Saudi Arabia would pump out its oil and sell it to America). Source 1 and 2 shows that this trend has carried on through to 2001; Saudi Arabia is the biggest exporters of oil, while the USA is the biggest consumer. ...read more.

However 3despite this offer, Kuwait decided to put America in charge of The Gulf War. "It has become clear that the rulers are not qualified to apply the religion and defend the Muslims. In fact, they have provided evidence that they are implementing the schemes of the enemies of the nation and religion and that they are qualified to abandon the countries and peoples."4 This was a motive for the attackers because both Saudi Arabia and America needed to keep Kuwait on their side for political position in the Middle East and Kuwait's preference of America over Saudi Arabia shows that America had too much influence over Kuwait. However Kuwait is not the only country in the Middle East with American influence and involvement. Israel's political position has been criticized for over half a century. Before the Second World War, Palestine maintained the strip between Syria, Jordan, Egypt and the Mediterranean Sea. However in 1948, Israel was given official borders inside Palestine towards the North West. By 1949 Israel held the majority of the strip and after the war in the 1960's against Egypt and Syria, Jerusalem was transferred over from Palestine to Israeli territory. 5Source 5 shows that even to the present day, land has continued to grow for Israel and shrink for Palestine. ...read more.

This means the loss of the site can cripple a countries economy. 7 In conclusion I believe that the biggest motive for the terrorists was the economical influence with Kuwait and Saudi Arabia. I believe this because if the USA was not so dependent on oil, tensions would not have risen in the Middle East meaning that the gulf war would not have happened. Even if a war did break out between Iraq and Kuwait, countries such as Britain and the USA would not have got involved. "Polls showed that the vast majority of the sons of the Islamic world were happy about these strikes because of... the huge criminality practised by... the United States in Palestine and other Muslim countries."8 1 Persian Gulf Exports by Country, 2001, (http://www.eia.doe.gov/cabs/pgulf2.html) Downloaded 15.04.09 2 World Oil Consumption by Country, (USA - light blue, rest of the world - grey), (http://www.eia.doe.gov/emeu/finance/usi&to/upstream/update/figure3.gif) Downloaded 15.04.09 3 Size of Kuwait and Saudi Arabia in square miles, (http://www.populstat.info/) Downloaded 15.04.09 4 Osama Bin Laden, Gulf Country Traitors, , BBC NEWS 5 Palestine loss of land over time, BBC NEWS 6 Osama Bin Laden, 28.12.01, BBC NEWS 7 Temple Mount, Map, BBC NEWS, (http://news.bbc.co.uk/1/shared/spl/hi/middle_east/03/holy_sites/html/default.stm) Downloaded - 21.04.09 8 Osama Bin Laden, 03.11.01 ?? ?? ?? ?? Jonathan Lupton - 10R History Coursework - 9/11 ...read more.