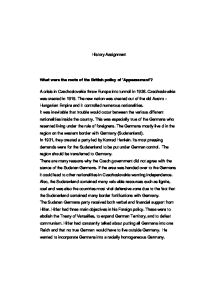 what were the roots of the british policy of appeasement?

History Assignment What were the roots of the British policy of 'Appeasement'? A crisis in Czechoslovakia threw Europe into turmoil in 1938. Czechoslovakia was created in 1919. The new nation was created out of the old Austro-Hungarian Empire and it controlled numerous nationalities. It was inevitable that trouble would occur between the various different nationalities inside the country. This was especially true of the Germans who resented living under the rule of foreigners. The Germans mostly lived in the region on the western border with Germany (Sudetenland). In 1931, they created a party led by Konrad Henlein. Its most pressing demands were for the Sudetenland to be put under German control. The region should be transferred to Germany. There are many reasons why the Czech government did not agree with the stance of the Sudeten Germans. If the area was handed over to the Germans it could lead to other nationalities in Czechoslovakia wanting independence. Also, the Sudetenland contained many valuable resources such as lignite, coal and was also the countries most vital defensive zone due to the fact that the Sudetenland contained many border fortifications with Germany. The Sudeten Germans party received both verbal and financial support from Hitler. Hitler had three main objectives in his Foreign policy. These were to abolish the Treaty of Versailles, to expand German Territory, and to defeat communism. Hitler had constantly talked about putting all Germans into one Reich and that no true German would have to live outside Germany. ...read more.

Italy had no direct interest in the Czech question, but was clearly not ready to face a European war in 1938 and Mussolini was therefore prepared to play the role of an honest broker. The Soviet Union was urged several times into action through the League of Nations or through the four power conference to restrain Germany. Czechoslovakia showed little inclination to seek Russia assistance and Britain was positively anxious to prevent Russia from getting involved. The British cabinet's solution to the problem in the Czechoslovakian Crisis was that an act called the Runciman mission. Britain did not want to become involved in a war with Germany. However, with tension rising in Czechoslovakia, the British Government came to the view that it could not stay out of the situation and then therefore sent an intermediary to Prague in the form of Runciman. It came on the 13th of September that Henlein demanded complete separation of Sudetenland from Czechoslovakia. The British Government decided to hold a meeting in order to 'keep Hitler Guessing'. Chamberlain suggested to Simon Hoare and Halifax (Foreign Secretary) to visit Hitler personally. It turned out that three meeting were held. These were on: - * 15th September, 1938 - Berchtesgaden * 22nd September, 1938 - Bad Godesberg * 29th September, 1938 - Munich The meeting on the 15th September saw Chamberlain persuade the Czechs to hand over the Sudetenland. Hitler promised that 'this was the last problem to be solved'. On the 22nd September Hitler made more demands at first Chamberlain refused but then decided that Czechoslovakia was not important to them no more. ...read more.