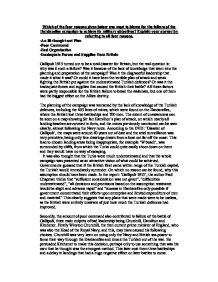 Which of the four reasons given below was most to blame for the failure of the Dardanelles campaign to achieve its military objectives? Explain your answer by referring to all four reasons.

Which of the four reasons given below was most to blame for the failure of the Dardanelles campaign to achieve its military objectives? Explain your answer by referring to all four reasons. -An Ill-thought-out Plan -Poor Command -Bad Organisation -Inadequate Forces and Supplies from Britain Gallipoli 1915 turned out to be a total disaster for Britain, but the real question is: why was it such a failure? Was it because of the lack of knowledge that went into the planning and preparation of the campaign? Was it the disgraceful leadership that made it what it was? Or could it have been the terrible plan of attack and weak fighting the British put against the underestimated Turkish defences? Or was it the inadequate forces and supplies that caused the British their battle? All these factors were partly responsible for the British failure to break the stalemate, but one of them had the biggest effect on the Allies destiny. The planning of the campaign was worsened by the lack of knowledge of the Turkish defences, including the 403 lines of mines, which were found on the Dardanelles, where the British lost three battleships and 700 men. ...read more.

Kitchener had also proved to be quite ignorant and stubborn, when he refused to listen to the many people telling him that 75,000 men would not be enough and he would need 150,000 for the battle to be successful. This was again very unwise, and could have been a changing point in the long run. The experienced and intelligent commander, Sir Ian Hamilton's career was destroyed after his terrible performance and eventual sacking from his duty in Gallipoli. It can be seen why in the report by Paul Chapman, an extract written by an A.J.P.Taylor, criticises Hamilton's performance. "Hamilton has designed his strategy well, but he was too polite to be a good general in the field", he writes along with suggesting he was "out of touch with events." It was also said in this report that Hamilton "allowed his subordinate commanders considerable discretion in devising their own tactics", which caused a couple of cases of bad planning, resulting in disaster, including: Anzac Cove General Birdwood, who landed men in darkness, leading to much confusion. Another was General Hunter Wilson, who landed after dawn, this, however, allowed the Turks a far greater chance of firing on his men. ...read more.

Dentists were too an extreme rarity, and any man with a broken tooth would often just have to put up with it. Hamilton was another affected by the inadequate forces and supplies from Britain. The report previously mentioned, written by Paul Chapman, says that "Hamilton was sent off with great haste, insufficient staff support, inadequate maps and badly loaded ships", similarly, "he was not allowed the reserves to compensate incurred or the level of shells and other ammunition that would be required for heavy fighting. He was refused military aircraft and an additional brigade of Indian troops that he asked for." Chapman perhaps having the opinion that the lack of supplies was more to blame than Hamilton's behaviour, for his eventual sacking and career ruined. Therefore, in conclusion, as the factor with most evidence to back it up, from various sources, I think that the inadequate forces and supplies from Britain was most to blame for the unshapely end to the battle of Gallipoli. Despite the other reasons being very important, poor leadership and bad organisation, perhaps even ill-thought-out planning was partly caused by the lacking of forces necessary, somewhat in my opinion, therefore the most valuable factor, that was not rightly in existence. By Amy Capel Word Count: 1487 ...read more.