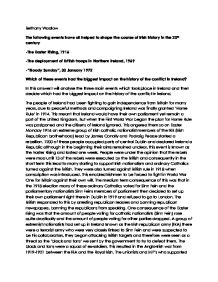 Which of the main 3 events had the biggest impact on the history of the conflict in Ireland?

Bethany Wadlow The following events have all helped to shape the course of Irish history in the 20th century -The Easter Rising, 1916 -The deployment of British troops in Northern Ireland, 1969 -"Bloody Sunday", 30 January 1972 Which of these events had the biggest impact on the history of the conflict in Ireland? In this answer I will analyse the three main events which took place in Ireland and then decide which had the biggest impact on the history of the conflict in Ireland. The people of Ireland had been fighting to gain independence from Britain for many years, due to peaceful methods and campaigning Ireland was finally granted 'Home Rule' in 1914. This meant that Ireland would have their own parliament yet remain a part of the United Kingdom. But when the First World War began the plan for Home Rule was postponed and the citizens of Ireland ignored. This angered them so on Easter Monday 1916 an extreme group of Irish catholic nationalist members of the IRB (Irish Republican brotherhood) lead by James Conolly and Padraig Pearse started a rebellion. 1200 of these people occupied parts of central Dublin and declared Ireland a Republic although in the beginning their aims remained unclear, this event is known as the Easter Rising and lasted one week. People were under the opinion that the rebels were mad until 13 of the rebels were executed by the British and consequently in the short term this lead to many starting to support Irish nationalism and ordinary Catholics turned against the British. ...read more.

Police faced a storm of missiles and petrol bombs from the BOGSIDE RESIDENTS, Rioting continued for 2days. This is known as the Battle of the Bogside. Police were unable to enter the area. The long term consequence of the battle of the Bogside was that Jack Lynch sent British troops into Ireland to restore order. Even today Protestants march through the streets of Ireland and celebrate their victory over the Catholics years ago. British troops had been sent into Ireland in 1969 to help restore order after the Easter Rising. In July 1970 the Stormont government sent 3000 troops into fall road area of Belfast to search for weapons and the IRA. The army fired over 1500 rounds of ammunition in gun battles with the IRA, 4 people were killed, tear gas was used, the area was put under a curfew for 35 hours sand homes were wrecked as they were searched. The British army was controlled by the Protestants and therefore under the circumstances of the Catholics and Protestants being constantly in battle with one another there began to be conflict. Catholics felt that the Army had betrayed them. In 1971 the provisional's responded to the British Army in the form of violence. They began a bombing campaign targeting Protestants businesses and shops and the army it's self. By the end of 1970 this had resulted in 46 soldiers been killed. Following this in March 1971 3 soldiers were lured to a party and then shot in the head, the again in August a soldier was shot dead and another 6 injured. ...read more.

This was meant to be a short term solution but British soldiers remained in Ireland for over 35 years. The Easter Rising resulted in the short term effect of 13 people being executed but it had huge long term effects on Ireland as without British troops being present in Ireland many of the events which were to follow the Easter rising would not have taken place and to this day Ireland is still parted into North and South. The British troops then introduced 'internment' which angered the Catholics furthermore and caused them to fight for equal rights even more. In the short term the following event of bloody Sunday resulted in the deaths of 13 Catholics being executed by the British soldiers, this led to the British government and Army becoming targets for the IRA in the medium term but its main long term consequence was that it worsened the already terrible situation by causing even more hatred and therefore fighting between Catholics and protestants and the two religions are still in conflict with each other to this day. The Easter Rising had a domino effect as it set off all these other events but even without it violence and conflict was prone to happen as the Catholics and Protestants had very different opinions as Catholics wanted to be independent whereas Protestants wanted to remain a part of the UK. However in reference to the question the Easter Rising was the most important and had the biggest impact on the history of Ireland. ?? ?? ?? ?? ...read more.