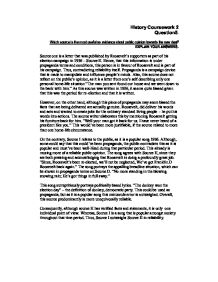 Which source is the most useful as evidence about public opinion towards the new deal? EXPLAIN YOUR ANSWERS.

History Coursework 2 Question5. Which source is the most useful as evidence about public opinion towards the new deal? EXPLAIN YOUR ANSWERS. Source one is a letter that was published by Roosevelt's supporters as part of his election campaign in 1936 - Source H. Hence, that this information is under propaganda terms and conditions, this person is in favour of Roosevelt and is part of his campaign. Thus, contradicting reliability itself. Propaganda is a campaign device that is made to manipulate and influence people's minds. ...read more.

Roosevelt, did deliver his words and acts and wanted to create jobs for the ordinary standard living people - he put his words into actions. The source writer elaborates this by mentioning Roosevelt getting his furniture back for him. "Well your man got it back for us. I have never heard of a president like you." This would've been more justifiable, if the source related to more than one home-life circumstance. On the contrary, Source I relates to the public, as it is a popular song 1936. ...read more.

The song portrays the appalling breadline situation, which can be shown in propaganda terms on Source D. "No more standing in the blowing snowing rain; He's got things in full sway." This song surreptitiously portrays politically based lyrics. "The donkey won the election day" - the definition of donkey, democratic party. This could be used as propaganda, but as it is a popular song this minuscule error is outweighed. Overall, this source predominantly is more unequivocally reliable. Consequently, although source H has verified facts and statements, it is only one individual point of view. Whereas, Source I is a song that is popular amongst society throughout that time period. Thus, Source I outweighs Source H in reliability. ...read more.