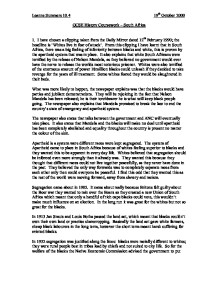 1. I have chosen a clipping taken from the Daily Mirror dated 12th February 1990; the headline is 'Whites live in fear of attack'. From this clipping I have learnt that in South Africa, there was a big feeling of inferiority between blacks and white, this is proven by the apartheid system that was in place. It also explains that white South Africans were terrified by the release of Nelson Mandela, as they believed no government would ever have the nerve to release the worlds most notorious prisoner. Whites were also terrified of the enormous amount of power 18million blacks could unleash if they decided to take revenge for the years of ill treatment. Some whites feared they would be slaughtered in their beds. What was more likely to happen, the newspaper explains was that the blacks would have parties and jubilant demonstrations. They will be rejoicing in the fact that Nelson Mandela has been released; he is their torchbearer he is what will keep black people going. ...read more.

In 1913 Jan Smuts and Louis Botha passed the land act, which meant that blacks couldn't own their own land or practise sharecropping. Basically the land act gave white farmers, cheap black labourers in the long term, however the short term meant harsh suffering for evicted blacks. In 1932 segregation was justified along the lines: blacks were racially different to whites; they were rural people best in tribes lead by chiefs and not suited to city life. So for the welfare of the blacks the Native Economic Commission advised the government to put blacks into reserves, which will be more productive under modern farming methods. This new law increased reserves to 13.5 per cent of South Africa. Other laws were also introduced to keep blacks and whites separated. In 1948 elections were held. The Nationalists published a report saying what apartheid would involve. It was very simple this was obviously what voters wanted as it was a vote winner amongst white voters. ...read more.