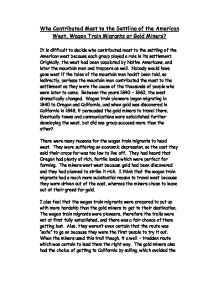 Who Contributed Most to the Settling of the American West, Wagon Train Migrants or Gold Miners?

Who Contributed Most to the Settling of the American West, Wagon Train Migrants or Gold Miners? It is difficult to decide who contributed most to the settling of the American west because each group played a role in its settlement. Originally, the west had been populated by Native Americans, and later the mountain men and trappers as well. Nobody would have gone west if the tales of the mountain men hadn't been told, so indirectly, perhaps the mountain men contributed the most to the settlement as they were the cause of the thousands of people who were later to come. Between the years 1840 - 1860, the west dramatically changed. Wagon train pioneers began migrating in 1840 to Oregon and California, and when gold was discovered in California in 1848, it persuaded the gold miners to travel there. Eventually towns and communications were established further developing the west, but did one group succeed more than the other? There were many reasons for the wagon train migrants to head west. ...read more.

The wagon train migrants headed west because they wanted more land which was fertile and good for farming on. The miners went west because they wanted to become wealthy with gold. The wagon train migrants and gold miners both went west for selfish, arrogant reasons, as they both did it for their own gain, not Gods. The manifest destiny simply helped people with a conscience come to terms with treating the Indians incorrectly. Those who went west to become farmers generally came from east America, whereas the miners came from all over the world. This shows that gold mining was far more popular and important, and people were more prepared to go to California. In 1848, the population in Oregon and California were very similar. California had attracted 14,000 and Oregon 12,000. However, by 1860 there was a dramatic increase in California, and not as much in Oregon. California had a massive population of 380,000 and in comparison, Oregon only had 52,000. This proves that the gold mining industry was considered to be more important and popular amongst the world. ...read more.

The wealth created from the gold helped to give the USA a leading role in world trade. This made the purchase of essential materials for development possible, for example steel for the construction of the railway lines. Also, as California had such a high population, it ensured that the railway line would pass through California rather than Oregon. I feel that although both groups produced goods (crops and gold) that produced money, the gold miners contributed most because it was them who had the money to build the railway, and it passed through their town not Oregon. Overall, I feel that although the farmers and miners had a huge impact on the American West, the gold miners contributed to it the most. California developed quicker and in the long-term it flourished by becoming rich from the gold and eventually having the railroad pass through California. I think that this was the most important benefit because the trains sped up and increased transport and trade further helping settlement in California. Although it was always civilised in Oregon and not in California, Oregon never progressed from there to attract as many people to help develop it. ...read more.

On the whole a well focussed answer which shows a good level of knowledge and understanding of the issue. It needed a better structure and could have looked at the impact of the migrants first in some depth and then as a contrast looked at the ways the miners helped to develop to develop the west. This would have allowed for more explanation of the impact of each group.