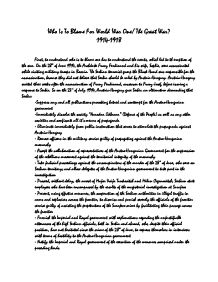 Who Is To Blame For World War One/ The Great War?

Who Is To Blame For World War One/ The Great War? 1914-1918 First, to understand who is to blame one has to understand the events, which led to th eruption of the war. On the 28th of June 1914, the Archduke Franz Ferdinand and his wife, Sophie, were assassinated while visiting military troops in Bosnia. The Serbian terrorist group the Black Hand was responsible for the assassination, because they did not believe that Serbia should be ruled by Austria-Hungary. Austria-Hungary waited three weeks after the assassination of Franz Ferdinand, successor to Franz Josef, before issuing a response to Serbia. So on the 23rd of July 1914, Austria-Hungary gave Serbia an ultimatum demanding that Serbia: -Suppress any and all publications provoking hatred and contempt for the Austro-Hungarian government -Immediately dissolve the society "Narodna Odbrana" (Defense of the People) as well as any other societies and confiscate all it's means of propaganda - Eliminate immediately from public instruction that serves to stimulate the propaganda against Austria-Hungary - Remove officers in the military service guilty of propagating against the Austro-Hungarian monarchy - Accept the collaboration of representatives of the Austro-Hungarian Government for the suppression of the rebellious movement against the territorial integrity ...read more.

So Germany declared war with Russia, who was allied with France because of the Franco-Russian Alliance set up in 1894, in response to Germany France declared war on Germany. France was an ally of Great Britain because of the Entente Cordiale in 1904, so Britain finally entered the Great War by declaring war on Germany and Austria-Hungary. In this war there were two powers the Triple Alliance/Central Powers -Italy Germany and Austria Hungary; and the Triple Entente/The Allies-Britain France and Russia. Another cause of the Great War was imperialism. The European nations now ruled colonies and had spheres of influences and protectorates. The two countries with the most colonies were France and Britain with colonies in Africa, India, and Asia. Germany and Italy decided that they too wanted a colonial empire to produce for them raw materials and cheap labor, but all the desirable locations had been claimed; so they became jealous of the other countries who had control of colonies and more competitive for the remaining potential colonies. Nationalism, and Militarism, also known as the Arms Race were two more elements adding to the eruption of the Great War/ World War One. ...read more.

The political leaders could have done more to delay the onset of war, for example Germany could have encouraged Austria to make Serbia pay for the death of the Archduke in another way other that going to war with them. Although no one nations could prevent war because of the faulty decisions made by the European leaders, which rose with each decision, the tension between the European countries. Though the Leader's leadership may have been faulty, it was followed because of propaganda making it seem right, such as yellow journalism which stretched the truth and sensationalized it's stories. Austria-Hungary did want war with Serbia, but it was counting on Russia backing down from Austria's German backing, so that it would win Serbia, and gain revenge for the death of their Archduke. Each country had a part in the events leading up to the war, therefore they are all to blame, since no one country can be given the sole credit for starting the "Great War to end all wars" which lasted four years. The political leaders made unwise decisions as a result of the militarism, nationalism, and ally systems, which all eventually erupted into hostilities between the European countries, the hostility that eventually progressed into the "Great War". ...read more.