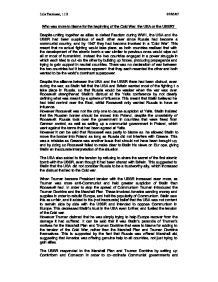 Who was more to blame for the beginning of the Cold War, the USA or the USSR?

Who was more to blame for the beginning of the Cold War, the USA or the USSR? Despite uniting together as allies to defeat Fascism during WWII, the USA and the USSR had been suspicious of each other ever since Russia had become a communist country, and by 1947 they had become involved in a 'Cold War'. This meant that no actual fighting would take place, as both countries realised that with the development of the atomic bomb a war similar to previous ones would wipe out all or most of humankind. Instead the two countries engaged in a power struggle in which each tried to out-do the other by building up forces, producing propaganda and trying to gain support in neutral countries. There was no declaration of war between the two countries but it became apparent that they each resented the other and both wanted to be the world's dominant superpower. Despite the alliance between the USA and the USSR there had been distrust, even during the war, as Stalin felt that the USA and Britain wanted most of the fighting to take place in Russia, so that Russia would be weaker when the war was over. ...read more.

In order to stop the spread of Communism Truman introduced the Truman Doctrine and the Marshall Plan. These involved America sending money and supplies in order to rebuild Europe, and halt the popularity of Communism. Stalin saw this as unfair, and it added to his (not inaccurate) belief that the USA was not content to remain side by side with the USSR and intended to oppose Communism in Europe. This decreased Stalin's trust in the USA even further, and fuelled the tension of the Cold war. However Truman claimed that he was simply trying to help Europe recover from the damage it had suffered. It can be said that it was Stalin's paranoia of Truman's motives for the Marshall Plan and Truman Doctrine that were to blame for adding to the tension of the Cold War, rather than the Marshall Plan and Truman Doctrine themselves. This is supported by the fact that Russia was offered Marshall aid, suggesting that America was offering genuine help to all countries, not just trying to gain allies. ...read more.

Each was only concerned with their own interests, which differed greatly, and created tension when they tried to work together to reach an agreement, for example at Yalta and Potsdam. The tension was not even a new occurrence, but had existed for a long time before WWII, America had refused to enter WWI on the allies side whilst Russia was still fighting. As the Cold War unfolded in the late 1940s each side created suspicion with every move, which caused the opposing side to respond, creating more suspicion, which triggered a response, and so on. In conclusion, neither the USA nor the USSR was more to blame for the beginning of the Cold War, it was created out of tensions that existed before WWII, and returned once the two countries had no reason to be allies. They were both suspicious of each other due to their very different political systems, and the suspicion grew with every action taken. Neither country did any one thing that triggered the start of the Cold War, instead it grew from mutual hostility and differences, and flourished due to mistrust between the leaders of the USA and USSR, and each country's need for self-protection. Lula Teunissen, 11H 07/05/07 ...read more.