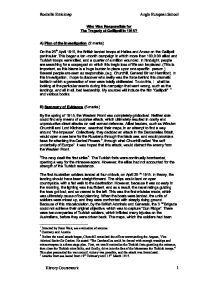 Who Was Responsible for The Tragedy at Gallipoli in 1915?

Who Was Responsible for The Tragedy at Gallipoli in 1915? A) Plan of the Investigation (2 marks) On the 25th April 1915, the British landed troops at Helles and Anzac on the Gallipoli peninsular. This began a ten-month campaign in which more then 100,000 allied and Turkish troops were killed, and a quarter of a million wounded. In hindsight, people are searching for a scapegoat on which this tragic loss of life can be placed. (This is important, as this blame is a huge burden to place upon one specific person.) Several people are seen as responsible, (e.g. Churchill, General Sir Ian Hamilton). In this investigation, I hope to discover who really was the force behind this dramatic battle in which a generation of men were totally obliterated. To do this, I shall be looking at the particular events during this campaign that went wrong, such as the landings, and all in all, bad leadership. My sources will include the film "Gallipoli"1 and various books. B) Summary of Evidence (5 marks) By the spring of 1915, the Western Front was completely gridlocked. Neither side could find any means of surprise attack, which ultimately resulted in costly and unproductive direct attacks on well-armed defences. ...read more.

John Laffin was an Australian historian, with expertise in 20th Century forces. He spent most of his life researching the First World War, and looking at various perspectives on controversial battles, such as Gallipoli. Its main limitations however, are that it is an Australian writing, who therefore saw everything from an Australian point of view. Both of theses sources were written after the event happened, and so, are not necessarily accurate. Also, with the film, many people generally see a film, and believe that is exactly the way that particular event took place. This can be seen as a positive or a negative thing. The book was a very useful source, as it provided in depth analysis of the events, which took place, whereas the film is limited to a certain amount of time etc, and therefore, could not include all the necessary details. D) Analysis Generally, the tragedy at Gallipoli is looked at through the eyes of ordinary soldiers, scholars, military historians, naval historians, journalists, politicians and senior Service officers. Perhaps the most interesting to look at, is that of the men that lived through the experience as ordinary soldiers. One soldier's diary read: "Perhaps as the years roll by, we will be remembered as the expedition that was betrayed by jealousy, spite, indecision and treachery. ...read more.

This plan persuaded the war council victory was possible, and the attack was formulated. 4 Attacks from sea lasted from 19th February until 13th March 1915. 5 Australian and New Zealand Army Corps. Although these were the majority of soldiers, the campaign also involved men from Britain and Ireland. A more minor role was played by the Indian and French soldiers. 6 Mustapha Kemal 7 This was the result of the Ottoman Empire being known as the "Sick man of Europe". 8 The commander of the First Division. The first Australian to be promoted to major general, and the first to command a division. 9 A commanding officer that landed that afternoon. 10 General Sir Ian Hamilton 11 Source: DAMN THE DARDANELES! The Agony at GALLIPOLI. John Laffin 12 Source: The Encyclopedia of Military History. R. Ernest Dupuy and Trevor N. Dupuy 13 Major-General W. P. Braithwaite was Hamilton's Chief-of Staff. 14 The Administrators controlled areas such as supply, shipping, water, hospital services etc. 15 Strangely enough, this was not far from the truth. It was thought that war was far to complex a business to leave in the hands of the fighting generals! 16 General Head Quarters 17 Both were battleships, from where the battle was commanded. Hamilton in fact, controlled the entire operation from a ship, and never once stepped ashore! Rochelle Enticknap Anglo European School 1 History Coursework ...read more.