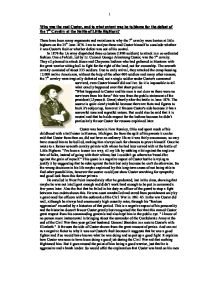 Who was the real Custer, and to what extent was he to blame for the defeat of the 7th Cavalry at the Battle of Little BigHorn?

Who was the real Custer, and to what extent was he to blame for the defeat of the 7th Cavalry at the Battle of Little BigHorn? There have been many arguments and variations to why the 7th cavalry were beaten at little bighorn on the 25th June 1876. I am to analyse these and Custer himself to conclude whether it was Custer's fault or whether defeat was out of his control. In 1876 the Us army dispatched three columns (1800 soldiers) to attack in a co-ordinated fashion. One of which, led by Lt. Colonel George Armstrong Custer, was the 7th cavalry. They all planned to attack Sioux and Cheyenne Indians who had gathered in Montana with the great warrior sitting bull to fight for the right of the land, not for ownership. The seventh cavalry consisted of about 225 soldiers. Due to early arrival, they attacked the camp housing 12,000 native Americans, without the help of the other 600 soldiers and many other reasons, the 7th cavalry were tragically defeated and, not a single soldier under Custer's command survived, even Custer himself did not live. So it is impossible to tell what exactly happened over that short period. "What happened to Custer and his men is not clear as there were no survivors from his force" this was from the public statement of the president (Ulysses S. Grant) shortly after the battle in June 1876. The source is quite clearly truthful because there are facts and figures to back it's subject up, however it favours Custer's side because it has a sorrowful tone and regretful nature. But could also be said that it is neutral and that he holds respect for the Indians because he didn't particularly favour Custer for reasons explained later. Custer was born in New Rumley, Ohio and spent much of his childhood with a half sister in Monroe, Michigan. ...read more.

The best course of action would have been to keep all the troops together and either attack in numbers or send out more scouts to find the exact number of Indians they were to face in battle. But the three troops decided that they should attack in the usual successful way so generals Terry and Custer would attack from the west, General Crook would attack from the north and General Gibbon would attack from the East. But the Sioux engaged the forces of General Crook, after a fierce battle, Crook decided to retreat. So as a short-term effect it could be a possibility that the scout was on the Native American side and could have said that there were fewer Indians than thought causing Custer to believe that he could handle them by himself. Or the scout could have told Reno that the Indians knew that they were to attack in around 11 days so to prevent them from getting away, General Custer thought he should speed up. Or the scout could have then turned around and informed the Indians of the attacking plans and when they were to do so. Terry instructed Custer to take the seventh cavalry and follow this trail until the enemy camp was located, then to wait for Gibbon and Terry before attacking the Indians. It was said that on the 24th June Custer's Indian scouts told him of the huge village and that Custer and his men didn't have enough ammunition to fight so many. But Custer was overly confident and so rejected the new revolving riffles that the Indians actually had, instead he stuck with the single shot guns to make his "victory" look more great. Tim Slessor stated that he had "a general disregard for the Indians capabilities". The source is unlikely to be biased because it is a historian who is on neither side of the battle. ...read more.

The sources that originate from white American history books because the defeat didn't look good to them so may have covered many of the US Army's errors and made it out to be the fault of the Indians. 1876 ironically also marked the one hundredth anniversary of American independence. Many of the sources that favour and praise Custer are marginally more accurate than those which are negative towards him especially those written by the people that were on the side of the white Americans. They tried to make Custer out to be a good warrior and that it wasn't the army's fault that they lost, as they were so shocked at the seventh cavalry's defeat. I both agree and disagree that Custer was to blame for the defeat at little bighorn. Custer made many mistakes that could have been avoided if he had overlooked his status and took advice from others. I feel that General George Custer was a ruthless and ambitious man who risked both his men and himself in an attempt to win glory for himself, as he hungered so greatly for it. But Custer was also courageous, patriotic and had the potential for being a great military leader with his selfishness put aside. Custer's blunders cost him his life, but gained him everlasting fame, which is all he wanted. I feel that it was Custer's fault more than other factors out of his control but only because if he had had back up they still would have lost because the Indians had wanted to win more- they had had enough after trying to play fairly. The Indians had more to lose than the White men such as their religious mountains and their conventional way of living, as opposed to a bit more gold (material things) for the white Americans. So the natives had more skill and ambition, which could never have been defeated with the great number who shared this feeling. By Samantha Fulcher 11MNJ 1 1 ...read more.