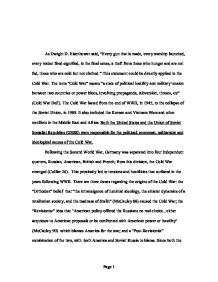 As Dwight D. Eisenhower said, "Every gun that is made, every warship launched, every rocket fired signified, in the final sense, a theft from those who hunger and are not fed, those who are cold but not clothed." This statement could be directly applied to the Cold War. The term "Cold War" means "a state of political hostility and military tension between two countries or power blocs, involving propaganda, subversion, threats, etc" (Cold War Def.). The Cold War lasted from the end of WWII, in 1945, to the collapse of the Soviet Union, in 1989. It also included the Korean and Vietnam Wars and other conflicts in the Middle East and Africa. Both the United States and the Union of Soviet Socialist Republics (USSR) were responsible for the political, economic, militaristic and ideological causes of the Cold War. Following the Second World War, Germany was separated into four independent quarters, Russian, American, British and French; from this division, the Cold War emerged (Collier 26). This proximity led to tensions and hostilities that surfaced in the years following WWII. There are three theses regarding the origins of the Cold War: the "Orthodox" belief that "the intransigence of Leninist ideology, the sinister dynamics of a totalitarian society, and the madness of Stalin" (McCauley 88) ...read more.

Soviet Russia wanted to achieve complete protection because of recurring invasions. The only way that Stalin saw to do this was to acquire territory for a buffer zone: "The behavior of Russia under the Communists had been Russian behavior rather than communist behavior....There has been the same effort to achieve security by expanding the Russia space, by constantly pushing back the menacing presence of the foreigners across the Russian borders" (Halle 11). In each nation of the buffer zone, Stalin wanted Communist-friendly governments. He set up these governments in Poland, Hungary, Romania, Bulgaria, Czechoslovakia, and the Soviet Zone of Germany. These countries came to be known as the Eastern Bloc (Warren 39). At the Potsdam Conference that met in July of 1945, the Allied leaders met to decide the fate of Germany. There, Churchill, Attlee, and Truman accused Stalin of doing just this, setting up puppet governments. When the two sides could not reach a decision about Germany, the Western Powers decided to work without the Soviets and created a West Germany and a section of Germany under Stalin's control (Sherman 18,23). ...read more.

Each country worked towards their aims with the full awareness that the other country was doing the opposite. Thus, both countries were responsible for the Cold War, supporting the Post-Revisionist view. Finally, Soviet Russia and America had differing ideological views. Solely on their different forms of government, tensions rose. America's democracy wanted to attain security in a way that opposed violence, while Stalin wanted to achieve security by threats and intimidation (Gaddis). The governments were also quite different. The USSR's was a communist republic and autocracy while the United States was a capitalist democracy. Both countries adhered very strictly to their government's principles leading to further tensions, supporting the Post-Revisionist thesis. With a plethora of evidence supporting both the Orthodox and the Revisionist views, the only thesis that still holds true is the Post-Revisionist. Both the Soviet Union and the United States purposely aggravated each other. Though during the Korean and Vietnam Wars, it was not easy to decide if one or both countries were responsible for the war, it is easy to conclude now that both the United States and Soviet Russia were to blame for starting the Cold War. ?? ?? ?? ?? Page 1 2 ...read more.

It is evident that the author has done a great deal of reading and quotations are well selected, but not always well explained. The author covers the different explanations for the Cold War well and shows understanding of the different schools of thought but could have included more evidence to justify their Post-Revisionist stance and extended their conclusion. 4 out of 5 stars.