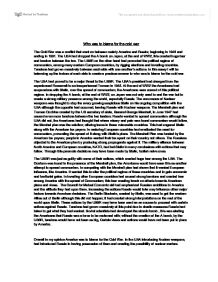 Who was to blame for the cold war The Cold War was a conflict that went on between mainly America and Russia; beginning in 1945 and ending in 1991. The USA had dropped the A bomb on Japan, at the end of WW2, this created huge fear and tension between the two. The USSR on the other hand had promoted the political regime of communism, among many eastern European countries, by rigging elections and invading countries. Tensions had grown massively between each side with one another's actions. In this essay I will be balancing up the factors of each side to create a precious answer to who was to blame for the cold war. The USA had proved to be a major threat to the USSR. The USA's president had changed from the experienced Roosevelt to an inexperienced Truman in 1945. At the end of WW2 the Americans had suspensions with Stalin, over the spread of communism; the Americans were scared of this political regime. ...read more.

The Russians objected to the American plan by producing strong propaganda against it. The military alliance between North America and European countries, NATO, had led Stalin to many conclusions with actions that may follow. Through this paranoia decisions may have been made by Stalin, foolish naive ones. The USSR was just as guilty with some of their actions, which created huge fear among the USA. The Conform was found in the presence of the Marshall plan, the Americans would have seen this as another attempt to spread communism. In competing with the Marshall plan had shown that it wanted European influence, like America. It wanted this to alter the political regime of these countries and to gain economic and territorial gains. In invading other European countries had caused strong tensions and created fear among America with the spread of Communism; this fear creating knock on effects towards American plans and views. The Council for Mutual Economic aid had emphasized Russian ambitions to America and the attitude they had upon them. ...read more.

Without the introduction of these weapons the fear and tension between the two countries would have not escalated to what it was. Russia had created the Berlin Blockade which had been a major occurrence to how far Russia would go with America although this event was a caused due to the weapons America had demonstrated to them. The occurrence of the nuclear weapons had created the strong tensions along with the iron curtain which were the main reasons to the Cold war. Other factors such as the change in political leaders from WW2 may have proven to have equal importance to the start of the Cold war. The relationship of previous leaders was strong with Stalin compared to Truman and Attlee; with a good relationship with the USSR the cold war may not of occurred. The inexperience from WW2 had left the UK and USA unaware of Stalin; he was able to manipulate decisions due to their lack of knowledge. Certain agreements may have been pushed through causing the Cold War. ...read more.