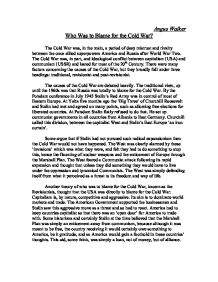 Who was to Blame for the Cold War

Angus Walker Who Was to Blame for the Cold War? The Cold War was, in the main, a period of deep mistrust and rivalry between the once allied superpowers America and Russia after World War Two. The Cold War was, in part, and ideological conflict between capitalism (USA) and communism (USSR) and lasted for most of the 20th Century. There were many factors concerning the causes of the Cold War, but they broadly fall under three headings: traditional, revisionist and post-revisionist. The causes of the Cold War are debated heavily. The traditional view, up until the 1960s was that Russia was totally to blame for the Cold War. By the Potsdam conference in July 1945 Stalin's Red Army was in control of most of Eastern Europe. At Yalta five months ago the 'Big Three' of Churchill Roosevelt and Stalin had met and agreed on many points, such as allowing free elections for liberated countries. At Potsdam Stalin flatly refused to do that. He set up communist governments in all countries from Albania to East Germany. ...read more.

Some historians and certainly Stalin at the time believed that the Marshall Plan was simply an enticement away from communism, because although it was meant to be free, the country receiving it would certainly owe something to America, be it gratitude, and so America would gain a foothold in these countries' thoughts. This aid, some think, was simply a loan, not of money, but of alliance. Another reason that supports the Revisionist view was America's use of the Atomic Bomb. Many believed that he used it simply to intimidate Russia. This theory explains why the USA needed to use two; as if they dropped two in quick succession then the Russians would believe that the Americans had many more bombs that they actually did. I thing that this is the only logical explanation as the official reason for the dropping of the nuclear bomb was to frighten the Japanese into submission by the sheer force of the bomb and so to use two was simply a waste of innocent civilian life unless it had a political motive. ...read more.

The war became so heated because the peoples of both nations believed so strongly that not only was their way of life better and right, but it was paramount to the future existence of humanity. This cause supports the view that neither country was directly to blame for the Cold War, as it was not their actions, provocative or not, that caused it, but their ideals and beliefs. In conclusion I shall say that both sides were equally to blame for the start of the Cold War. Their ideological conflict made coexistence and cooperation impossible, and so the two superpowers were drawn into a war to support and fight for their beliefs. The other factors of the start of the Cold War are also important; had the Russians not pursued such a radical expansion then the West would not have felt so threatened as to oppose Stalin; and had the West not angered Stalin with the Marshall Plan, pressured him with the atomic bomb and treated his with such contempt, such as agreeing a surrender with Mussolini without even consulting him, then Russia would not have been forced into defending its beliefs, sometimes aggressively, against the West. ...read more.