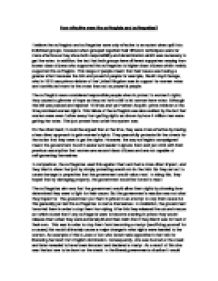 Who were more effective in gaining women rights, suffragists? Or suffragettes?

How effective were the suffragists and suffragettes? I believe the suffragists and suffragettes were only effective to an extent when split into individual groups, however when grouped together their different techniques were far more effective as they show both responsibility and determination which was necessary to get the votes. In addition, the fact that both groups have different supporters varying from lowers class citizens who supported the suffragettes to higher class citizens which mainly supported the suffragists. This range of people meant that their cause was having a greater effect because the rich and powerful people for example, David Lloyd George, who in 1916 was prime minister of the United Kingdom was in support for women votes and contributed more for the votes than not so powerful people. The suffragists were considered responsible people when in protest to women's rights; they caused a glimmer of hope as they set forth a bill to let women have votes. ...read more.

After this they released the cat and mouse act which stated that if any suffragette were to become starving in prison they would release them when they were extremely ill and then claim that it they died it was for fault of their own. This was in order to stop them from becoming a martyr (sacrificing yourself for a cause) this would ultimately cause a major change in what rights were handed to the women. An example of this is Joan of Arc who faced male opposition in her trek for liberating her land from English domination. Consequently, she was burned at the steak and later revealed to have been innocent and declared a martyr. As a result of this she was the last one to be burnt on the steak. In the liberal governments situation it would mean that they would have to give women their rights. The suffragettes were also successful in gaining publicity by causing commotion and by doing things such as chaining themselves to Buckingham palace. ...read more.

Yet this was rejected by the liberal government due to fear that most of the rich and healthy women would vote conservative. Suffragettes were causing a mixed, but mainly a negative view for themselves by generally publicizing their chaos. This shows that neither campaign group were causing a very prodigious indentation on how they should get their rights deserved however, the fact that people thought that starving themselves was nearly similar to the Emily Davison incident wherein she jumped in front of a horse to make the ultimate sacrifice in aid to the campaign. In my opinion, this was the case, as I think she knew that it was the perfect moment to make a sacrifice when both suffragists and suffragettes were being rendered useless by their actions. In my opinion, her sacrifice was made from motivation from another martyr, possibly Joan of Arc. I think she knew that people would think that as she has died for her cause and therefore make her a martyr. Therefore, she knew that if the government had to reveal that people were taking their own lives for the rights then they would have to give it to them. ...read more.