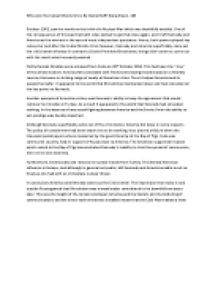 Who won the Cuban Missile Crisis?

﻿Who won the Cuban Missile Crisis: By Daniel Koffi Nana-Klouvi, 10S October 1962, saw the world on the brink of a Nuclear War which was thankfully avoided. One of the consequences of this was that both sides wished to get that close again, and it left Kennedy and America as the winners in the eyes of most independent spectators. Hence, both powers played key roles prior and after the Cuban Missile Crisis however, Kennedy and America superficially came out the crisis better whereas in contrast to Soviet Premiere Khrushchev; things didn?t seem to come out with the result what he exactly wanted. ...read more.

Thus it helped America and its people feel safer. It appeared to the world that Khrushchev had backed down and had conceded all the key points to Kennedy. Another example of American victory was Kennedy?s ability to keep the agreement that would remover her missiles in Turkey. As a result it appeared to the world that Kennedy had conceded nothing. In the absence of any actual fighting between America and the Soviet Union the ability to win prestige was doubly important. Although Kennedy superficially came out of the crisis better, America did loose in some respects. ...read more.

Furthermore, America also did remove its nuclear missile from Turkey. This limited American influence in Europe, and although in general not public, left Kennedy and America unable to act as freely as she had with an immediate nuclear threat. In conclusions America and Kennedy came out the Crisis better. The impression that many in and outside Russia gained that Khrushchev was a weak leader contributed to his downfall two years later. This was the height of the tensions between America and the Soviets and the bettering of communications and the direct hotline that was installed meant that the Cold War thawed a little. ...read more.