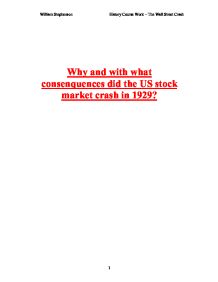 Why and with what consenquences did the US stock market crash in 1929?

Why and with what consenquences did the US stock market crash in 1929? The Wall Street crash happened on 24th October 1929. It was a sudden dramatic fall in the value of shares on Wall Street which was the US stock market. There were many causes for the Wall Street crash. The first reason why the US stock market crashed in 1929 was the long term cause of over production. This was where companies produced too much of their product. The 1920's was based on making as much of a certain product as possible but by 1929 there no longer any need for this because the industries were running out of customers as people couldn't go on spending forever. There would only be a certain amount of a certain product that you need. These are things such as fridges and cars. This meant that there was a surplus of manufactured goods. This was a cause of the Wall Street because it meant that companies had to get rid of their products and to do this they had to sell at discount prices. Therefore profits were much lower. The consequences were that share prices went down. The second long term cause why the US stock market crashed in 1929 was the fact that there was an uneven distribution of wealth in the US. ...read more.

This meant that people stopped spending money and the demand for goods fell so industry declined. The first consequence of the Wall Street crash was banking. In the few years after the Wall Street crash around 5000 banks collapsed. This was disastrous as this meant that the savings of millions of Americans were just wiped out and that thousands of companies were destroyed because they couldn't finance their debts. With all of the banks in ruins, no loans could be made so new companies couldn't be started. Finally manufactured goods fell by 80% because no one was buying anything. This meant that with no new investment and with the falling demand, hundreds of thousands of workers lost their jobs. This led to huge unemployment. The second consequence of the Wall Street crash was unemployment. Because of the huge drop in the profits of companies after the Wall Street crash, employers could not longer afford to keep many of their workers. This meant that there was huge unemployment all over the country and by 1933 the unemployment level had hit 14 million. Also in America there was no state welfare so people lost all of their money and got no help from the government which meant that there was a huge amount of poverty all over the country. ...read more.

His next move was to build the Colorado Dam. This was a dam on the Colorado River which was there to try and irrigate the dried up fields to provide water and food to the people in that area who were starving. He also spent $4,000,000,000 to try and relieve poverty but it was too late. Also in 1932 Hoover set up the Reconstruction Finance Corporation. This meant that the government could loan money to the state governments to help rebuild communities but all of these things were too little too late. Hoover was very unpopular. Another consequence of the Wall Street crash was the rejection of the bonus marchers. This was when 20,000 ex-soldiers from the First World War went to Washington to ask for immediate payment of their bonus. The bonus was a payment of $500 that had been promised by an act of 1924 which was due 1945. They camped outside the White House and Hoover refused to meet them and in August he ordered the army to come in and clear the bonus marchers out and this made the current Hoover even more unpopular. I conclude that on the 24th October 1929, Wall Street crashed and because the United States were not ready for this and because they thought that the boom would last forever, the consequences were devastating. ?? ?? ?? ?? William Stephenson History Course Work - The Wall Street Crash 1 ...read more.