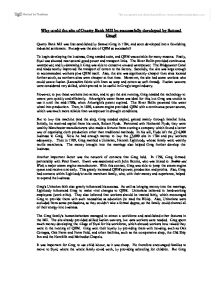 Why could the site of Quarry Bank Mill be successfully developed by Samuel Greg?

Why could the site of Quarry Bank Mill be successfully developed by Samuel Greg? Quarry Bank Mill was first established by Samuel Greg in 1784, and soon developed into a flourishing industrial settlement. But why was the site of QBM so successful? To begin developing the business, Greg needed a site, and QBM was suitable for many reasons. Firstly, Styal was situated near several good power and transport links. The River Bollin provided continuous waterpower, and by damming it Greg was able to conserve unused waterpower. The Bridgewater Canal and roads nearby improved the transport of cotton to the factory. Secondly, the site was large enough to accommodate workers plus QBM itself. Also, the site was significantly cheaper than sites located further south, as northern sites were cheaper at that time. Moreover, the site had some workers who could weave fustian (Lancashire fabric with linen as warp and cotton as weft thread). Fustian weavers were considered very skilled, which proved to be useful in Greg's target industry. ...read more.

Then in 1789, Greg married a Unitarian, Hannah Lightbody, whose family were wealthy textile merchants. The money brought into the marriage also helped Greg further develop the business. Another important factor was the network of contacts that Greg held. In 1796, Greg formed partnership with Peter Ewart. Ewart was associated with John Rennie, who was linked to Boulton and Watt, a major steam engine manufacturer. With this contact, Greg was able to jump the steam engine queue and receive one early. This greatly increased QBM's power, production and profits. Also, Greg had contacts within Lightbody's textile merchant family, who, with their money and experience, helped to expand the business. Greg's Unitarian faith also greatly influenced his success. As well as bringing money into the marriage, Lightbody influenced Greg to make vital changes to QBM. Unitarians believed in hard-working employees (work ethic). They also believed that workers should be treated fairly, which encouraged Greg to provide them with such necessities as education (to read the Bible). ...read more.

The Poor Law Commission sent children to Greg from workhouses in Liverpool, Newcastle-under-Lyne and Manchester, and he apprenticed them to work in QBM until they were adults (or for a set amount of years). The Select Vestry didn't have to pay for upkeep of children, keeping the poor rate down; Greg had an abundant supply of cheap workers, which benefited QBM; and the children learned a new trade. Apprentices often continued working at QBM with their children. Without this cheap labour, Greg would not have been able to make these profits, and use them to continually develop QBM. I conclude that QBM was successfully developed by Greg because of the advantages of the original site and his family. Without the original features of the site, such as proximity to power supplies and presence of fustian weavers, Greg may have chosen another (perhaps less successful) site. It was the Greg family who invested money in QBM, and whose dedication and diligence earned the loyalty of workers. Very few mills provided their workers with such good conditions, which owed to their success. ?? ?? ?? ?? ...read more.