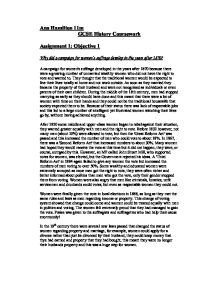 Ana Hamilton 11m GCSE History Coursework Assignment 1: Objective 1 Why did a campaign for women's suffrage develop in the years after 1870? A campaign for women's suffrage developed in the years after 1870 because there were a growing number of unmarried wealthy women who did not have the right to vote and wanted to. They thought that the traditional women would be expected to live their lives totally at home and not work outside. As soon as they married they became the property of their husband and were not recognised as individuals or even parents of their own children. During the middle of the 18th century, men had stopped marrying as early as they should have done and this meant that there were a lot of women with time on their hands and they could not be the traditional housewife that society expected them to be. Because of their status there was lack of respectable jobs and this led to a large number of intelligent yet frustrated women watching their lives go by, without having achieved anything. After 1850 some middle and upper-class women began to rebel against their situation, they wanted greater equality with men and the right to vote. Before 1832 however, not many men (about 10%) were allowed to vote, but then the 'Great Reform Act' was passed and this increased the number of men who could vote to about 18%. In 1867, there was a 'Second Reform Act' that increased numbers to about 30%. Many women had hoped they would receive the vote at this time but it did not happen, they were, or course, outrgaed by this. However, an MP called John Stuart Mill, who supported votes for women, was elected, but the Government rejected his ideas. A 'Third Reform Act' in 1884 again failed to give any women the vote but increased the numbers of men voting to over 50%. ...read more.

After the war they needed to register to receive the vote again. Some believe that women's suffrage was just added on to the bill that sorted out votes for men. I believe this could be true but also that votes for women would never have been added to the bill in the first place had the campaign for women's suffrage gone on. Most people believe that women's suffrage was granted because of women's acts during the war. Women stepped into the traditional 'men's jobs' and performed satisfactorily, some may even say they handled these jobs better than the men because some of the women had been so well educated and articulate. Even though they had been fighting against the very people they worked for. Many politicians thought that, women's efforts as loyal citizens and patriots should be rewarded with suffrage being granted. Though this may be the opinion of the majority. Source H shows that this is not necessarily the truth. Many women were not welcome in farms, factories and hospitals. Men were much more tolerant of them being nurses and teachers, but they were not keen on them being Dctors, surgeons and professors. The source goes on to state that Politicians were rewarding women with the vote for bringing up children successfully to fight for their country. It also says that only women over 30 were allowed to vote because then they would hopefully follow their husbands. This would have been to the favour of the current Liberal Government, as they would believe that as they were presently in power, they would be re-elected with a higher majority thanks to the votes of the women. Many former Suffragettes held the opinion that they were the cause of women being granted the vote. The Suffragettes believed that their years of violent campaigning had done much to worry the government. They thought that it was their campaigning that led to the vote. ...read more.

In this essay I aim to address the key reason as to why it true or false that because the work that women did during the War gaine dthem the vote. I wil use sources H , I and J, along with my own knowledge to reach a conclusion. Source H is a secondary piece of evidence that was written in 1980, may years after both the War and the campaign for womens suffrage. Source H talks mainly about how men resented women and had a poor attitude towards women as they believe dthat the women should not be doing 'their' jobs and should be doing stereotypical female jobs instead, such as, Nursing or providers or refreshements for troops. Even though many men thought like this the Government believed that The women had performed a loyal service and women over thirty should been givien the vote, this was because by this time many women had already had a family and was married, were more sensible and were thought to vote the same way as their husbands. Source I is also a secondary source which was written in 1980. It states that it was War itself that change dthe mood of the Government and made it more open to change and so this was why women were given the vote and it was nothing to do with their loyal contribution towards their country. This source is useful as it lays donw a good contrast to source H. Source J is a primary source which comes form a speech made by the Prime Minister Herbert Asquith. It states that although he is gainst the women having the vote, he cannot deny it to them as they have not been violent for a long period of time, and also contributed well towards the War. The Prime Minister although added that only some measure of suffrage should be given. Overall I believe that it was the War that bought the women emancipation because without the women having the oppoutunity to prove themselves as equals to men, they may still not even have the vote today. ...read more.