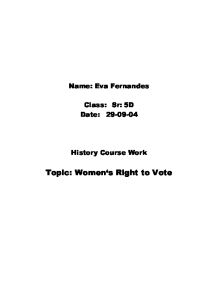 Their methods differed greatly but both groups saw the vote as a symbol of citizenship in a democratic country and argued for women to be represented. They wanted the vote to end the economic, social and moral exploitation of women. In 1897 the National Union of Women's Suffrage Societies (NUWSS) was formed. The NUWSS, known as the suffragists, held public meetings, organised petitions, wrote letters to politicians, published newspapers and distributed free literature. Millicent Fawcett the leader of suffragists, believed in peaceful protest. She felt that any violence or trouble would persuade men that women could not be trusted to have the right to vote. Many of the suffragists had links with the Liberal party as members of the NUWSS were often the wives, mothers or daughter of prominent Liberal politicians. Helen Taylor was the step-daughter of John Stuart Mill who championed the cause of women's suffrage in Parliament. The membership of the NUWSS was socially mixed in England, it was predominantly middle class, but it also consisted of working class women. The NUWSS was the largest suffrage group consisting of 21, 571 members in 400 societies in England Scotland and Wales. The suffragists ultimately believed and practiced a policy of persuasion, where by they hoped through meetings petitions, reasoned argument, legal propaganda and the threat of tax avoidance, they would persuade Parliament to grant their demands. The futile results of the NUWSS efforts of persuasion caused the formation of The Women's Social and Political Union was formed in 1903 by a group of former members of the NUWSS in Manchester who were no longer willing to restrict themselves to the constitutional methods favoured by the NUWSS. ...read more.

The suffragettes' militancy is the one of the main factors women's suffrage was achieved in 1918. Although before the war the suffragettes' militancy angered many and seemed as if it would delay the enfranchisement process, it was necessary to threaten the government out of a stalemate and into a state of action. The women by throwing off Victorian ideals created a new identity and a new place in society for themselves. With the coming of the war, the suffragettes patriotically suspended all militancy during the war, and undertook responsibilities, such as working in munitions factories, hospitals, and municipal offices. However the leader of the Suffragists, Millicent Fawcett declared that it was suspending all political activity until the conflict was over. Although the NUWSS supported the war effort, it did not follow the WSPU strategy of becoming involved in persuading young men to join the armed forces. The suffragists consisted of older women when compared to the active, aggressive and violent young suffragettes. It must be noted that only women over 30 were given the vote and they were not the ones who had made the most substantial contribution towards the war. The younger women, the suffragists, who helped out in munitions factories, and the war effort in general, were actually denied the vote. Excessive and demonstrative pre-war campaigning and violent militancy the suffragist and suffragettes made women's suffrage a national issue. As more and more women and men became aware of their cause, suffrage seemed achievable. Parliament realised this. The coming of the war saw a change in leaders who were more sympathetic to their cause. They used the war as an excuse to give women the right to vote. If women had not contributed to the war effort with the fervor that they did, parliament may not been able to justify giving women the vote. 8 ...read more.