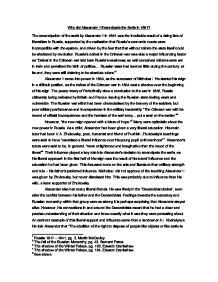 Why did Alexander II Emancipate the Serfs in 1861?

Why did Alexander II Emancipate the Serfs in 1861? The emancipation of the serfs by Alexander II in 1861 was the inevitable result of a rising tide of liberalism in Russia, supported by the realisation that Russia's economic needs were incompatible with the system, and driven by the fear that that without reform the state itself could be shattered by revolution. Russia's defeat in the Crimean war was also a major influencing factor as "Defeat in the Crimean war laid bare Russia's weakness, so well conceived reforms were set in train and permitted the birth of politics... Russian tsars had learned little during the century: at its end, they were still claiming to be absolute rulers."[1][1] Alexander II came into power in 1855, as the successor of Nicholas I. He started his reign in a difficult position, as the defeat of the Crimean war in 1854 cast a shadow over the beginning of his reign. The peace treaty of Paris finally drew a conclusion to the war in 1856, Russia ultimately being defeated by Britain and France, leaving the Russian state feeling weak and vulnerable. The Russian war effort had been characterised by the bravery of the soldiers, but poor military performance and incompetence in the military leadership "The Crimean war with its record of official incompetence and the heroism of the serf army... ...read more.

After extensive tours of Russia, often stopping in desolate little villages, Alexander knew what the situation was like for those swamped by poverty. He was sympathetic and could empathise with the sufferers: "The boy himself shrank from violence and was easily moved to pity by the sight of misery."[7][7] But Alexander was still prepared to do anything to appease the masses to avoid revolution. Another popular explanation as to why Alexander emancipated the serfs was that he wanted to modernise Russia "Raising the productivity of the Russian economy was one of the main motives for embarking on the emancipation of the serfs."[8][8] After the 1861 emancipation, he introduced many other reforms in the military, legal system, local governments, education system and in the way of censorship. He introduced local legal authorities, significantly relaxed censorship, abolished corporal punishment, established new education institutions and set up district assemblies in 1864. All these extra reforms put the emancipation into a seemingly liberal context. However, the reforms could also have been introduced to try and revolutionise the economic system of Russia. Russia still had no trains, and was a pre industrial agricultural country. Alexander had many dealings with other countries, and so saw how many other countries worked. ...read more.

However, Alexander wanted to avoid any other far sweeping changes across the country, to do with his autocratic rule or the state of the nobility - things which all would have been jeopardised by continuing the system of serfdom, as a revolution would have been inevitable. Alexander knew that the possibility of a revolution was very real and not far away without reformatory action. Liberalism within Russia was at its peak during Alexander's reign as censorship regulations had been lifted considerably. We have to remember than Alexander's predecessor, Nicholas I, had also touched upon the idea of emancipating the serfs. It was something which had been proposed for a while, so the fact that Alexander actually performed the emancipation can be seen more as a political necessity rather than a reforming zeal. Therefore, in conclusion, it was a mixture of the increasing liberalism in Russia rising to its peak, the defeat in the Crimean war, the need for economic reform and the fear of revolution which ultimately lead Alexander to emancipate the serfs. Given the evidence, it can also be concluded that despite his liberal influences, in the final analysis, it was a conservative act on his part. ...read more.

This is an excellent response that covers all major, possible motivations for emancipation and uses historiography really well to support the points made. It is focused and cogent throughout. 5 out of 5 stars.