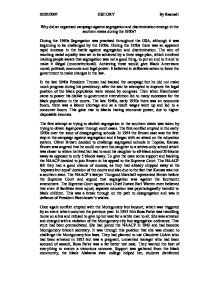 Why did an organised campaign against segregation and discrimination emerge in the southern states during the 1950s?

Why did an organised campaign against segregation and discrimination emerge in the southern states during the 1950s? During the 1940s Segregation was practised throughout the USA, although it was beginning to be challenged by the 1950s. During the 1950s there was an apparent rapid increase in the battle against segregation and discrimination. The aim of reaching racial equality was set to be achieved by a three stage plan, which involved making people aware that segregation was not a good thing, to put an end to it and to make it illegal (unconstitutional). Achieving these would give Black Americans moral, political, economic and legal power. It believed in deliberate action to force the government to make changes in the law. In the late 1940s President Truman had backed the campaign but he did not make much progress during his presidency, after the war he attempted to improve the legal position of the black population were vetoed by congress. Then when Eisenhower came to power his dislike to government intervention led to many successes for the black population in the courts. The late 1940s, early 1950s there was an economic boom, there was a labour shortage and as a result wages went up and led to a consumer boom. ...read more.

The campaign against segregation was led by Martin Luther King, a Baptist Minister who believed that change could be "provoked" through peaceful means. As president of the Southern Christian Leadership Conference, King became the leader of the peaceful campaign to achieve equal rights. King was a good speaker, he argued in threes which made them very effective and he brought morality into the argument with words like 'evil'. King was a compromise candidate because he believed in a bit of everything; legal, moral, economic not just concentrating on one which had failed previously. By using the church there was no need for legal reasons as they had the moral arguments. They had cleverly orchestrated a campaign; step by step, which include students and the church which could not be accused of being communist because they were anti-communist. After the cold war, social developments at home helped the issue of black civil rights to come to the forefront. Some people experienced racial integration during the war, when they went to the UK and other European countries. The blacks who went abroad found integration but realised that they themselves lived in 'the land of the free', but in reality were not and this triggered the need for change back home. ...read more.

Although he had increased awareness of the need for greater equality, with the FEPC and had decreased discrimination in federal employment and contracts. There were a number of various developments which occurred during the 1950s which gave way for a campaign against segregation. After 1945, the anti-communism mood of the cold war made militant campaigning more difficult, although it did raise the issue of racist attitudes in the 'land of the free'. The NAACP had concentrated on legal campaigns and eventually achieved success in 1954 with the Brown case, although a white backlash to its success led to the destruction of many southern branches. In 1956 it was even outlawed in Alabama. The brown case was a major breakthrough for the Civil Rights Movement, even thought it did not bring about the standard of change that was first anticipated. Also the event which took place at Little Rock was an important date in the history of civil rights in the 1950s, although it had not been a typical one. There had also been some presidential support of civil rights, but this had a limited effect, a more direct, organised campaign against segregation was the answer. 02/05/2007 HISTORY By Rasmali ...read more.