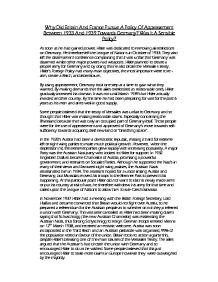 Why Did Britain And France Pursue A Policy Of Appeasement Between 1933 And 1939 Towards Germany?

Why Did Britain And France Pursue A Policy Of Appeasement Between 1933 And 1939 Towards Germany? Was It A Sensible Policy? As soon as he had gained power, Hitler was dedicated to removing all restrictions on Germany. He therefore left the League of Nations in October of 1933. They also left the disarmament conference complaining that it was unfair that Germany was disarmed whilst other major powers had weapons. Hitler planned to create a proper army for Germany and by doing this he also broke the Versailles treaty. Hitler's Foreign Policy had many main objectives, the most important were to re-arm, create a Reich, and lebensraum. By using appeasement, Germany took one step at a time to gain what they wanted. By making demands that the allies overlooked as reasonable ones, Hitler gradually increased his domain. It was not until March 1939 that Hitler actually invaded another country. By this time he had been preparing for war for the past 6 years as his men and arms well in good supply. Some people believed that the treaty of Versailles was unfair to Germany and so thought that Hitler was making reasonable claims. Especially concerning the Rhineland because that was only an occupied part of Germany itself. Those people were for the use of appeasement and approved of Germany's move towards self-sufficiency towards acquiring itself new land or "breathing space". ...read more.

In March 1936, Hitler remilitarised the Rhineland, so the west of Germany could become strong again. This was breaking another of the clauses of the Treaty of Versailles. Although the Allies signed treaties with Czechoslovakia saying that they would do anything they could, they did not have any immediate help or forces needed at that time. Britain and France did not always agree on certain subjects and France was proving increasingly unreliable by pulling out of its previous agreements with Czechoslovakia. At this point Russia had promised Czechoslovakia its support. This ended up being a turning point for Russia and when they were excluded from agreements with Czechoslovakia they decided that the Allies were not to be trusted. Therefore they joined Forces with Hitler and stunned the world by forming the Nazi-Soviet Non Aggression Pact. This meant that Stalin would be making no attempt to aid Poland. Hitler had actually already offered him some land in Poland, to make up for the land lost to the Allies at Brest Litovsk. By now people realized that Hitler had no intent on stopping Germany's expansion. The allies decided something must be done to stop this, and so they rushed to complete treaties with other vulnerable countries nearby Germany such as Poland, Romania and Greece. Although Hitler heard that this was happening, dismissed the possibility of unity between Britain, France and these countries by comparing this situation to the past mistakes the Allies had made. ...read more.

Germany's army and resources had been increasing, it was feared that Germany's large army would start bombing the Allied countries like they had bombed Spain during the civil war. Britain and France had over-estimated the number of Germany's forces however although there was an exaggeration of forces, Germany still had a credible amount of men in the army and a large amount of resources. In this case appeasement allowed the allies time to re-arm and increase arms production. This allowed an extra year in which radar; spitfires, conscription and many more vital resources were introduced and improved upon. The allies certainly needed this time to get their act together and to prepare for potential war. However it also allowed Germany extras time to prepare itself for another war. By using appeasement, the Allies showed no strength to stand up against Hitler/ Mussolini invading other countries and basically encouraged them to continue as they wished. Hitler had closely watched how the Manchurian dispute had (or in this case had not) been resolved. He used this to convince his government to do as he wished and used this to his advantage. The League of Nations had already proved incapable of decisive action to deter or reverse aggression. At that time there was no working mechanism for other countries to support a stand made against Hitler. The public could see everything had been tried to stop war however it was inevitable that in the end they would have had to go to war with Germany. ?? ?? ?? ?? ...read more.