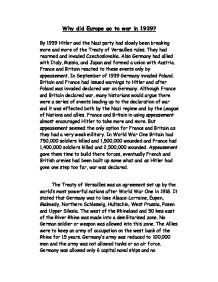 Why did Europe go to war in 1939? By 1939 Hitler and the Nazi party had slowly been breaking more and more of the Treaty of Versailles rules. They had rearmed and invaded Czechoslovakia. Also Germany had allied with Italy, Russia, and Japan and formed a union with Austria. France and Britain reacted to these events only by appeasement. In September of 1939 Germany invaded Poland. Britain and France had issued warnings to Hitler and after Poland was invaded declared war on Germany. Although France and Britain declared war, many historians would argue there were a series of events leading up to the declaration of war and it was effected both by the Nazi regime and by the League of Nations and allies. France and Britain in using appeasement almost encouraged Hitler to take more and more. But appeasement seemed the only option for France and Britain as they had a very weak military. In World War One Britain had 750,000 soldiers killed and 1,500,000 wounded and France had 1,400,000 soldiers killed and 2,500,000 wounded. Appeasement gave them time to build there forces, eventually French and British armies had been built up some what and as Hitler had gone one step too far, war was declared. ...read more.

Sure enough Hitler came to power in 1933, although looking back on it people think Hitler had a lot of support behind him and was bound to rule Germany strongly, at the time the general attitude was that Hitler would lose power quickly and very few could have foreseen that by the summer of 1934 Hitler would be supreme dictator of Germany. He achieved this by a very clever combination of methods, some legal, others dubious. His first action was to put Germany under complete Nazi rule. He then took the position of Fuhrer upon Hindenburg's death. From the start of the Nazi reign of Germany through to 1939, Hitler had been ignoring the rules of the Treaty of Versailles, in 1937 he allied with and formed an anti-communist pact with Italy and Japan. In 1939 he allied with Russia eliminating most risk of Russian invasion. Hitler also made a union with Austria. All of these went against the rules of the Treaty of Versailles. Hitler had spent most of Germany's finances on rearmament and by 1939 was ready to invade and sure enough took back the Sudetenland then took Czechoslovakia whilst they were in a state of chaos. ...read more.

In Mein Kampf (A book Hitler wrote during his imprisonment after the Munich Putsch) it shows the extremes that Hitler backed his 'Aryan race.' He was prepared to kill millions of Jews too and in his frame of mind make the world a better place. In Hitler's early years he was a soldier and it showed his 'passion for war.' From the start of his reign it was inevitable that he was going to expand the German empire. He even wrote about it in Mein Kampf. Hitler was a very strong character who was very passionate about all of his beliefs and had he never come to power in Germany it may have never had such a bold leader as to directly break the rules of such an important treaty and a war on the scale of World War Two would never have broken out. However after WW1 I believe a war was inevitable due to the unresolved issues and tension around the world at the time. Many if not all countries were dissatisfied with the terms of peace after WW1. The combination of Hitler's lust for power and the poor terms on which WW1 ended caused Europe to go to war in 1939. ...read more.