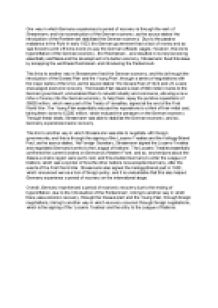 Transfer-Encoding: chunked ﻿One way in which Germany experienced a period of recovery is through the work of Stresemann, and his reconstruction of the German economy, as the source states ?the introduction of the Rentenmark stabilised the German economy?. Due to the passive resistance in the Ruhr in early 1923, the German government had a lack of money and so was forced to print off extra money to pay the German officials? wages. However, this led to hyperinflation of the German economy - the Reichsmark - and resulted in money becoming essentially worthless and the development of a barter economy. ...read more.

The Dawes Plan issued a loan of 800 million marks to the German government, and enabled them to rebuild industry and commerce, allowing a new influx of money into the German economy, to help them repay the punitive reparations of £6600 million, which were part of the Treaty of Versailles, signed at the end of the First World War. The Young Plan essentially reduced the reparations to a third of their initial cost, taking them down to £2200 million, which reduced the pressure on the German economy. Through these deals, Stresemann was able to stabilise the German economy, and so, Germany experienced some recovery. ...read more.

Stresemann also signed the Kellogg-Briand pact in 1938, which renounced war as a tool of foreign policy, and it is undoubtable that this also helped Germany experience a period of recovery on the international stage. Overall, Germany experienced a period of economic recovery due to the ending of hyperinflation, due to the ?introduction of the Rentenmark?, linking to another way in which there was economic recovery, through the ?Dawes plan? and the Young Plan, through foreign negotiations, linking to another way in which recovery occurred through foreign negotiations, which is the signing of the ?Locarno Treaties? and the entry to the League of Nations. ...read more.