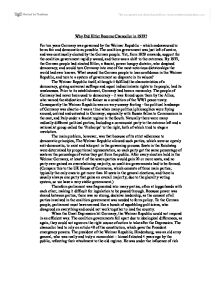 Why Did Hitler Become Chancellor in 1933?

Why Did Hitler Become Chancellor in 1933? For ten years Germany was governed by the Weimar Republic - which endeavoured to be as fair and democratic as possible. The coalition government was just left of centre, and was continually elected by the German people. Yet, from 1929 onwards, support for the coalition government rapidly waned, and there was a shift to the extremes. By 1933, the German people had elected Hitler; a fascist, power hungry dictator, who despised democracy; and would turn Germany into one of the most notorious dictatorships the world had ever known. What caused the German people to lose confidence in the Weimar Republic, and turn to a system of government so disparate in its values? The Weimar Republic itself, although it fulfilled the characteristics of a democracy, giving universal suffrage and equal indiscriminate rights to its people; had its weaknesses. Prior to its establishment, Germany had been a monarchy. The people of Germany had never been used to democracy - it was forced upon them by the Allies, who named the abdication of the Kaiser as a condition of the WW1 peace treaty. Consequently the Weimar Republic was on very uneasy footing - the political landscape of Germany was chaotic-it was a time when many political philosophies were flying around; untried and untested in Germany; especially with Russia fallen to Communism in the east, and Italy under a fascist regime in the South. ...read more.

The terms of the treaty destroyed this military might, by reducing the amount of soldiers in the army from a few million to 100,000. . Hitler was all for rearmament, which Hitler believed was indispensible in creating a powerful Germany. He hoped to achieve strength through military conquest, gaining 'lebensraum' or 'living space' for the German people. This ideology attracted support from nationalists and the many demobilized soldiers in Germany. Hitler perpetrated the myth that the Weimar politicians had 'stabbed Germany in the back' by signing the treaty of Versailles, thereby inciting hatred of the social democrats and other pro-democratic parties. Many soldiers and members of the public believed that Germany could have won the Great War, urged on in this belief by army generals falsely claiming that the army could have carried the war on successfully. In truth the German army would invariably have been defeated, what with the British naval blockade of German ports stopping essential supplies reaching the military. Conditions were so bad that naval officers mutinied when ordered into a suicidal battle with the British Navy. The truth, however, did not matter to Hitler, as long as he could use the myth to gain more votes. The Nazis party's blatant hatred of Communism attracted the upper and middle classes. ...read more.

Nevertheless he was unable to maintain his position as chancellor, because he failed to get enough support from the Reichstag. Hitler was the only man left for the job, as he had the most legitimate claim towards it because he had the most support from the Reichstag - and the Nazis would probably revolt if he was not given the chancellorship. Franz von Papen assured Hindenburg that if he appointed Hitler as chancellor, and von Papen as vice-chancellor, Hitler, who had no experience of the job, could be controlled by von Papen. In this way, Hitler went from being the leader of an obscure right wing party to the last chancellor of the Weimar Republic. It is intriguing that he achieved this through the support of the German people, using democracy's weaknesses to cause its own downfall. Of course, he capitalized on the opportunities presented by the Great Depression, and it was from then on that the Nazis gained real momentum, but one could say that the Great Depression was a disaster waiting to happen; on the backs of loans taken out to fix the crisis of hyper-inflation, and to pay back reparations. In the end, though, it was a desperate people, searching for hope, guidance, and most of all, strong leadership, who enabled Hitler to reach the height of power with which he could implement his policies, and turn his ideals into reality. ...read more.