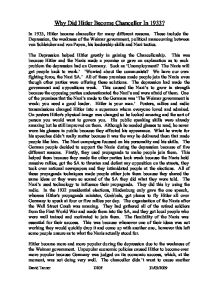 Why Did Hitler Become Chancellor In 1933?

Why Did Hitler Become Chancellor In 1933? In 1933, Hitler became chancellor for many different reasons. These include the Depression, the weakness of the Weimar government, political manoeuvring between von Schleicher and von Papen, his leadership skills and Nazi tactics. The Depression helped Hitler greatly in gaining the Chancellorship. This was because Hitler and the Nazis made a promise or gave an explanation as to each problem the depression had on Germany. Such as 'Unemployment? The Nazis will get people back to work.' 'Worried about the communists? We have our own fighting force, the Nazi SA.' All of these promises made people join the Nazis even though other parties were offering these solutions. The depression had made the government and oppositions weak. This caused the Nazi's to grow in strength because the opposing parties underestimated the Nazi's and were afraid of them. One of the promises that the Nazi's made to the Germans was 'The Weimar government is weak: you need a good leader. Hitler is your man.' ...read more.

The flexibility of the Nazis was essential for their success. This was because whenever one of their ideas was not working they would quickly drop it and come up with another one, however this left some people unsure as to what the Nazis actually stood for. Hitler became more and more popular during the depression due to the weakness of the Weimar government. Unpopular economic policies caused Hitler to become ever more popular because Germany was judged on its economic success, which, at the moment, was not doing very well. The chancellor didn't want to cause another hyperinflation so he raised taxes, cut wages and reduced unemployment benefit. This made people dislike him and they wanted a new chancellor, Hitler. The rise of extremism left the Weimar government weak. The communists' supporters on the left wing and the Nazis' supporters on the right wing, fought regular battles on the streets to try and gain political respect. The supporters fought because the different parties offered different policies and they blamed different people. ...read more.

Hitler had exceptionally good public speaking skills and he therefore was able to persuade German citizens to join the Nazi's. Hitler's tactics for the Nazis was another reason as to why he became chancellor. Although Hitler was arrested for the Munich Putsch, he was soon released from prison with a lot of new plans for the Nazis. They re-entered the Reichstag under the new name of the NSDAP. It did not do well so Hitler needed a new strategy as to gaining support. After the ban was lifted, Hitler officially re-launched the Nazi party at the Munich Beer Hall on the 27th February 1925. Hitler decided he needed to win over the working class. He tried really hard at public meetings to try and win them over but hen he found it was his anti-Semitic message that was working the most, so they increased that anti-Jewish propaganda. Hitler's book, Mein Kampf, raised a lot of support for the Nazis. In 1928 the Nazis decided to try and win over the middle classes because they were getting nowhere with the working class. Hitler spoke at many public meetings to try and gain their support. ?? ?? ?? ?? David Tanner D10F 31/03/2009 ...read more.