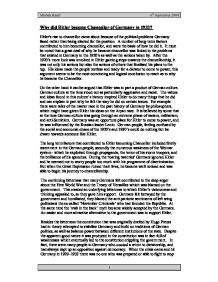 Why did Hitler become Chancellor of Germany in 1933?

Why did Hitler become Chancellor of Germany in 1933? Hitler's rise to chancellor came about because of the political problems Germany faced rather than being elected for the position. A number of long-term factors contributed to him becoming chancellor, and were the basis of how he did it. It must be noted that a great deal of why he became chancellor was linked to the problems that existed in Germany in the 1920's as well as the actions taken by. After the 1920's more luck was involved in Hitler gaining steps towards the chancellorship, it was not only his actions but also the actions of others that finalised his plans to the top. His ideas made the people restless and ready for a dictator to come to power, this argument seems to be the most convincing and logical conclusion to reach as to why he became the Chancellor. On the other hand it can be argued that Hitler was in part a product of German culture. German culture at the time stood out as particularly aggressive and racist. The values and ideas found in this culture's history inspired Hitler to do many things that he did and can explain in part why he felt the way he did on certain issues. For example there were talks of the master race in the past history of Germany by philosophers, which might have given Hitler his ideas on the Aryan race. It is believed by some that at the time German culture was going through an extreme phase of racism, militarism, and anti-Semitism. Germany was an opportune place for Hitler to come to power, and he was influenced by the Russian leader Lenin. German people, feeling confused by the social and economic chaos of the 1920's and 1930's could do nothing but be drawn towards someone like Hitler. The long term factors that contributed to Hitler becoming Chancellor included firstly resentment in the German people, secondly the numerous weakness of the Weimar system - which he exploited through propaganda, the terror of his storm troopers, and the brilliance of his speeches. ...read more.

When the crisis came and hit Germany in 1929-1933 there was no one who was prepared or able to fight to stop Hitler. Thus Hitler being portrayed as the most powerful person to lead the country at the time, and he seemed to be a logical solution to the problems Germany faced. This was the conclusion that most people had in mind, at the time of the crisis. In order for Hitler to become a symbol that people idolised, he needed to become more familiar and liked by the public, and most importantly allow his beliefs to become known to people. Therefore the financial support of wealthy businessmen gave Hitler the money to run his propaganda and election campaigns. Nazi propaganda persuaded the German masses to believe that the Jews were to blame and that Hitler was their last hope. At this point big businessmen and the elite saw Hitler as a politician who would not hold up business. To ensure his success, big businesses and the Elite in Germany supported Hitler financially. Which then enabled Hitler to campaign more and he could now afford to do things like using modern technology to publicise the Nazi party more widely. The elite had now also realised that they no longer needed to support the weak Republic. Since they saw Hitler as a better alternative, and now believed that they could get Hitler into power and eventually in the long run Hitler would benefit them. An important factor why people gave Hitler the support he wanted was simply because Hitler promising everybody something, so it was only sensible that they supported him, and seemed the only option since there was no alternative to him. Hitler had the ability to please people and tell them exactly what they wanted to hear. Hitler had answers for everyone's problems. He promised to restore order and greatness, and many people accepted Hitler with open arms. ...read more.

The number of Nazi seats in the Reichstag rose from 12 in 1928 to 230 in July 1932. In 1933 Hitler accomplished his goal to become chancellor of Germany. In January 1933 President Hindenburg asked Hitler to become Chancellor of Germany. He thought Hitler could solve Germany's problem and he thought Hitler would be easy to control. In February 1933 Germany's Reichstag building was burnt down. A Dutch communist was found near the scene of the crime. Hitler arrested many of his communist opponents. Everything that seemed to happen to Germany helped Hitler become Chancellor of Germany. In March 1933 the enabling act was passed Hitler could pass any laws he wanted to. He now turned on those he didn't trust in his party. Hitler had a lot of power at this moment in time but Hitler hadn't finished yet. If the parliament hadn't of been burnt down Hitler wouldn't have been able to pass his own laws and Hitler had made a lot of promises to people and the only way to achieve this was if Hitler had this great power. Furthermore not only did the people support his achieving the promises so did Hindenburg. It was only inevitable that Germany would find itself to be under the grip of a powerful dictator, no one could have fore saw the actions of Hitler and his colleagues. By looking at all the arguments the sensible conclusion that can be reached is that Hitler came to power due to a combination of many different reasons. However the backbone of Hitler's rise was based on the great economic instability of the time, which enabled Hitler to exploit the situation, and secondly the problems with the constitution (article 48), which undermined German Democracy, and the influences of the German culture on Hitler, which gave Hitler the ideas that had shaped his way of thinking. All this together helped in portraying the perfect picture in Hitler's rise to power in Germany in January 1933. Misbah Hanif 6th September 2004 1 ...read more.

This is a very strong response that addresses the question very well and evaluates evidence well throughout. The author considers both long and short term factors and reaches a convincing conclusion. 5 out of 5 stars.