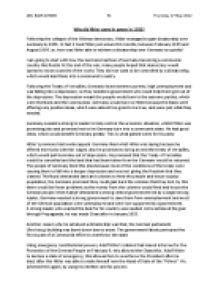 ﻿ABU BAKR AHMED 9C Thursday, 17 May 2012 Why did Hitler come in power in 1933? Following the collapse of the Weimar democracy, Hitler managed to gain dictatorship over Germany by 1936. In fact it took Hitler just around 18 months, between February 1933 and August 1934, so, how was Hitler able to achieve a dictatorship over Germany so quickly? I am going to start with how the Germans had fear of Germany becoming a communist country like Russia. At the end of the war, many people hoped that democracy would spread to most countries of the world. They did not want to be controlled by a dictatorship, which would lead them into a communist country. Following the Treaty of Versailles, Germany faced extreme poverty, high unemployment and was falling into a depression, so they needed a government who could help them get out of the depression. The depression meant the people would turn to the extreme parties, which were the Nazis and the communists. ...read more.

the colonies that they lost, by this there would be fewer problems as the money from the colonies would feed and house the German people. Mein Kampf demanded a strong central government led by a single strong leader, Germany needed a strong government to save them from unemployment and most of the German population were unemployed and were not supported by a government. A strong leader who wanted the best for his country was needed. As he achieved his goal through Propaganda, he was made Chancellor in January 1933. Another reason why he achieved a dictatorship was that, the German parliament (Reichstag) building was burnt down due to arson. The government falsely portrayed the fire as part of a Communist effort to overthrow the state. Using emergency constitutional powers, Adolf Hitler’s cabinet had issued a Decree for the Protection of the German People on February 4, this allowed the Chancellor, Adolf Hitler to declare a state of emergency; this allowed him to overthrow the President after he died, after this Hitler was able to make himself now the Head of State of the “Führer”. ...read more.

On June 1934, he rounded up around 85 SA leaders and shot them, the reason for his act was that they wanted to overthrow the government. This also showed others that Hitler regime was not a joke and was a serious matter; in fact it was merciless in its use of force, whenever it had been threatened by an outlaw. To deal with this further, after Hindenburg?s death, all army personnel had to swear allegiance or an oath of loyalty to Hitler personally. So whoever was regarded a threat by the Nazi party or by Hitler, were dealt with heartlessly. Hitler came in power by his Propaganda such as his speeches, which gathered a great crowd and his posters and pamphlets that were any German citizen could find everywhere they caught the eyes of the Germans. He relied on slogans instead of detailed politics. To conclude, there are many reasons why Hitler came into power. He conveyed his message properly, he also enforced rules that allowed no-one to overthrow him, he had promised to benefit the people of Germany greatly by cancelling the Treaty of Versailles and giving Germany back their land and freedom. ...read more.