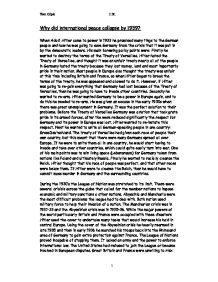 Why did international peace collapse by 1939?

Why did international peace collapse by 1939? When Adolf Hitler came to power in 1933 he promised many tings to the German people and how he was going to save Germany from the crisis that it was put in by the democratic leaders. His main forewing policy points were: Firstly he wanted to destroy the terms of the Treaty of Versailles. Hitler hated the Treaty of Versailles, and thought it was an unfair treaty nearly all of the people in Germany hated the treaty because they lost money, land and most importantly pride in their nation. Most people in Europe also thought the treaty was unfair at this time including Britain and France, so when Hitler began to break the terms of the treaty, he was appeased and allowed to do it. However, if Hitler was going to re-gain everything that Germany had lost because of the Treaty of Versailles, then he was going to have to invade other countries. Secondly he wanted to re-arm. Hitler wanted Germany to be a power in Europe again, and to do this he needed to re-arm. He was given an excuse in the early 1930s when there was great unemployment in Germany. It was the perfect solution to their problems. ...read more.

The appeasement here, again, was that France did nothing to stop this open breach of Versailles even though an increasingly powerful Germany put large numbers of troops on the France border. In 1938 Hitler went further. He invaded Austria and declared Anschluss. This, too broke the Treaty of Versailles. Again, France and Britain did nothing - even though the Austrian Chancellor Schuschnigg asked Britain and France to help. However a large percentage of the British public agreed with appeasement as they thought if they were German they would want to reverse the Treaty of Versailles. Wasn't it reasonable that Germany have an army? The Rhineland belonged to Germany, shouldn't German troops be stationed there? Versailles had given other countries self-determination, why not Austria and Germany? It is the 1938 Sudetenland crisis that is usually presented as appeasement. In 1938, Hitler got the Sudetenland Nazis, led by Henlein, to cause trouble, then he demanded union. But then Chamberlain intervened. Hitler threatened war, but promised that this was the 'last problem to be solved'. Chamberlain decided that Hitler was 'a man who can be relied upon', and persuaded the Czechs to hand over the Sudetenland. ...read more.

Anschluss with Austria, Remilitarisation of the Rhineland and finally the occupation of the Sudetenland are of Czechoslovakia. Hitler's actions almost went unnoticed and unchecked. The depression of the 1930;'s created huge numbers of unemployed and homeless in Germany crisis situations like this lead to the rise of extreme politics e.g. Communism and Nazism and many voted for Hitler in the elections eventually until the Nazis seized power. Appeasement, adopted by the British and French government during the 1930;s meant that Hitler could invade nation and form unions, direct violation the Treaty of Versailles without any reaction from the major powers in Europe during the 1930's as they 'promised they wouldn't show aggression towards Germany. Finally the Nazi-Soviet pact laid the foundations for war as both Germany and Russia had carved up Poland ready for invasion. Because they invaded Britain and France declared war on Germany. In conclusion that the main reason that international peace had collapsed by 1939 was because of Nazi German expansion and territorial gain in central Europe. Hitler's desire for an all powerful empire eventually lead to the invasion of Poland for lebensraum and war. ?? ?? ?? ?? Tom Gilpin 11B1 5/9/2007 ...read more.

This is a strong essay. However we need to be careful that we are using standard English structure and spelling etc. Also, there is a need to think carefully about a plan for the essay as some points were repeated and other points not highlighted enough.