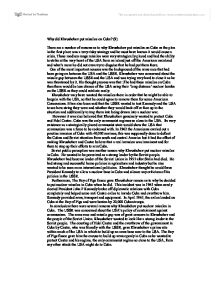 why did khrushchev put missiles on cuba?

Why did Khrushchev put missiles on Cuba? (9) There are a number of reasons as to why Khrushchev put missiles on Cuba as the plan in the first place was a very risky strategy and he must have known it would cause a crisis. These medium range missiles were very strategically placed and had the ability to strike at the very heart of the USA from an island just off the American mainland and what's more he did not even try to disguise that he had put them there. One of the most important reasons was the background of the arms race that had been going on between the USA and the USSR. ...read more.

However it was also believed that Khrushchev genuinely wanted to protect Cuba and Fidel Castro. Cuba was the only communist regimes so close to the USA. Its very existence as a strategically placed communist state would show the USA that communism was a force to be reckoned with. In 1962 the Americans carried out a practise invasion of Cuba with 40,000 marines; this was supposedly done to deflect the Cuban and Soviet attention from south and central America but it had the effect of making Khrushchev and Castro believe that a real invasion was imminent and for them to step up their efforts to arm Cuba. Soviet public perception was another reason why Khrushchev put nuclear missiles in Cuba. ...read more.

In conclusion there were several reasons why Khrushchev put nuclear missiles in Cuba. The USSR was concerned about the USA's policy of containment against communism. The arms race and missile gap was of great concern to Khrushchev and the people of the Soviet Union. Khrushchev wanted to look like a strong leader to the Soviet people. The courting of Fidel Castro and the overthrow of the government in Cuba by Castro, who was friendly with the USSR, gave Khrushchev a prime site within reach of the USA in which to build up an arms base near to the USA. The Bay of Pigs fiasco gave him the excuse to build up arms openly in Cuba as he wanted to protect Castro and his regime, the only communist regime so close to the USA, from any other attack the USA might do to Cuba. ...read more.