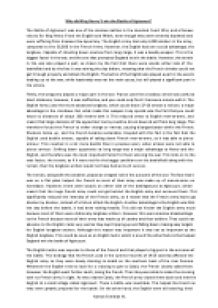 Why did King Henry V win the Battle of Agincourt?

﻿Why did King Henry V win the Battle of Agincourt? The Battle of Agincourt was one of the decisive battles in the Hundred Years? War, and a famous victory for King Henry V and the English and Welsh, even though they were severely depleted and were suffering from diseases like dysentery. The English Army had only 6,000 soldiers in the army, compared to the 36,000 in the French Army. However, the English had one crucial advantage, the longbow. Capable of shooting down enemies from long range, it was a deadly weapon. This is the biggest factor in the war, and the one that prompted England to win the battle. However, the terrain in the war also played a part, as shown by the fact that there were woods either side of the battlefield and by the fact it was raining the day before, meaning that the French chivalry could not get through properly and attack the English. The tactics of the English also played a part in the events leading up to the war, while leadership was not the main cause, but still played a significant part in the victory. Firstly, the weaponry played a major part in the war. France used the crossbow, which was useful at short distances, however, it was ineffective, and you could only fire 2-3 arrows a minute with it. ...read more.

However this was a massive disadvantage to the French because most of their army was made up of cavalry and foot soldiers. They could not advance to the English ranks very well as they kept tripping up and falling down making easy targets for English longbow archers. Although this reason was important it was not as important as the English longbow. This could be seen as an English tactic which is one of the other factors that helped England win the battle of Agincourt. The English tactics was superior to those of the French and that played a big part in the outcome of the battle. The strategy that the French used in the summer months of 1415 severely affected the English army as they were slowly starving to death on the southern bank of the river Somme. Whenever the English tried to look for a crossing to get to Calais, the French closely tailed them. However the English went further south, losing the French. Then they were able to make the crossing with no French army in sight. As they neared Calais, the French army closed them down and met the English at a small village called Agincourt. There a battle was inevitable. ...read more.

The English had a much better leadership figure, because English were led by King Henry, a very popular leader with the army. On the other hand, the French were led by Charles d?Albret, one of the highest ranked nobles in the country. The French were also co-led by four other French nobles. This may have led to a conflict of interests between the nobles, therefore creating poor tactics for the army. On the subject of leadership, the inspiring speech that King Henry gave his troops gave a huge morale boost to English troops that the French did not receive. It was such an important part of the war that it was even shown as one as a very crucial part of ?Henry V?, the Shakespearean play. Although this could have played a part in the outcome of the war, it could not have won the war on its own. The Battle of Agincourt was one of the most famous victories for England in the Hundred Year?s War. It will be remembered for many a generation. The longbow, the fact that it was on a muddy battlefield, the superior English tactics, and the inspiring speech by King Henry V all played a part in the war. If any one of these factors were not there, the war might not have happened. However, in my belief, the English longbow was the most influential reason in the war. Karnan Sembian 9L ...read more.