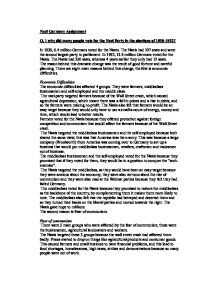 Nazi Germany Assignment Q. 1 why did many people vote for the Nazi Party in the elections of 1930-1932? In 1930, 6.4 million Germans voted for the Nazis. The Nazis had 107 seats and were the second largest party in parliament. In 1932, 13.8 million Germans voted for the Nazis. The Nazis had 230 seats, whereas 4 years earlier they only had 12 seats. The reason behind this dramatic change was the result of good fortune and careful planning. There are eight main reasons behind this change, the first is economic difficulties. Economic Difficulties The economic difficulties affected 4 groups. They were farmers, middleclass businessmen and self-employed and the middle class. The nazi party targeted farmers because of the Wall Street crash, which caused agricultural depression, which meant there was a fall in prices and a rise in debts, and so the farmers were making no profit. The Nazis also felt that farmers would be an easy target because they would only have to use a small amount of energy, money and time, which would lead to better results. Farmers voted for the Nazis because they offered protection against foreign competition and communism that would affect the farmers because of the Wall Street crash. The Nazis targeted the middleclass businessmen and the self-employed because both shared the same view; this was that America was the enemy. ...read more.

This caused a mass depression and people wanted to get out of this and the nazi party offer solutions to this depression, these were called the key issues. The key issues were affective because they were issues that everyone in Germany could relate to. First the Nazis attacked the treaty of Versailles, which gained them the vote because the treaty had caused Germanys "depression" situation and the Nazis had never been associated with the treaty. They led an assault against communism and promised to repair all the damage that had been caused to the economy. The Nazis also said they were going to promote national unity, strong leadership, discipline, order, traditional moral, family values and they criticised the Weimar republic for their "betrayal and neglect" of Germany. The people voted for the Nazis because these key issues were appealing to Germans who wanted to get out of the depression of the early 30s. The next factor for the Nazis being voted is political chaos. Political chaos This factor helped the nazis get votes because the Weimar republic had always been seen unpopular because the Weimar government had signed the treaty of Versailles and the treaty had been seen as a defeat because it had lead the people into the depression. The Weimar republic lost a lot of respect because they were not able to keep control of the growing fear of communism, whereas the nazi storm troopers were claiming to be the only party defending the nation against communism, and that won them a lot of votes. ...read more.

Women would be targeted by being told if they were not to vote for Hitler then the Germany family would be ruined. In newspapers different types of languages were used e.g. formal and informal, to target the different audiences and this would let the reader feel more comfortable reading the article if they could understand the style of language? Goebbels careful organisation, impressed many people because they were done on a huge scale, with thousands of uniformed soldiers in ranks, which created a sense of order and discipline. The atmosphere of the speeches would be good as there was music and light shows as well as rousing speeches. All of these skills gained the Nazis votes because they seemed to be promising a solution for everyone's problem and gave hope to millions. The last reason is Hitler. Hitler Hitler gained votes for the nazi party because he was a talented public speaker and because of this he was able to captivate his audiences. Hitler was also able to interact with his audiences by playing on their fears and hopes. Hitler had a good personality and this gave a sense of unity to the Nazis. Hitler's campaign was called "Hitler over Germany" this was because Goebbels decided to use an aeroplane in order for Hitler to appear at lots of venues on the same day and during the election campaign Hitler was able to speak to thousands of Germans, which gained the Nazis votes because Hitler was seen to be taking a personal interest in the public speeches by making appearances. ...read more.