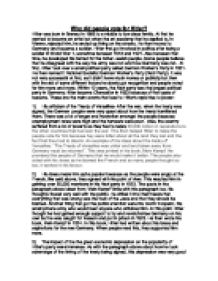 Why did people vote for Hitler ?

Why did people vote for Hitler? Hitler was born in Branau in 1889 to a middle to low class family. At first he wanted to become an artist but when the art academy that he applied to, in Vienna, rejected him, he ended up living on the streets. He then moved to Germany and became a soldier. Hitler first got involved in politics after being a soldier in World War 1, sometime between 1918 and 1921. Also between that time, he developed his hatred for the richer Jewish people. Some people believe that he disagreed with the way the army was run and how Germany was run. At first, Hitler took over a small political party called German Worker's Party in 1921. He then named it National Socialist German Worker's Party (Nazi Party). It was not very successful at first, as it didn't have much money or publicity but then with the aid of some different factors he slowly got recognition and people voted for him more and more. Within 12 years, the Nazi party was the largest political party in Germany.Hitler became Chancellor in 1933 because of five types of reasons. ...read more.

At this point Hitler thought he had gained enough support to try and revolutionise Germany on his own but he was caught for treason and put in prison in 1923. He then wrote his book, Mein Kampf in 1924. In this book, Hitler had written about his ideas and aspirations for the new Germany. When people read this, they supported him more. 3) The impact of the the great economic depression on the popularity of Hitler's party were immense. As with the paragraph above about how he took advantage of the timing of the treaty being signed, this depression was very good for his popularity. It worked in his favour as people were desperate for anything to believe in. As work and trade were slow and people were loosing jobs, Hitler promised the people solutions to every one's problems. The other choices available to vote for were the socialist Nazi party and the communist party, the depression had completely thrown the capitalist party out of the race for power. He swung his focus from his hatred of the Jews to how he could give the people work and provide for them if they voted for him. ...read more.

In 1928, the Nazi party even had their own emblem, the swastika. Hitler believed it was eye catching and easy to remember and draw. By this time, at the end of 1928 there were over 100,000 Germans in the Nazi Party. In conclusion, I think the people were pretty much bombarded with messages of Hitler and of newspaper headlines that screamed ''Our last hope :HITLER'' etc. So in the end, they had no choice but to vote for him because Hitler had cunningly used the best kind of publicity and propaganda to push his message across. I think this is the most influential reason for why people voted for Hitler. Hitler knew that if you kept throwing messages of HITLER, HITLER, HITLER at the people then it would sink in eventually. To summarise, I believe the reason people voted for Hitler was because of how he projected and marketed himself to the audience, the people. Another reason was that they were forced to because of his storm troopers, peer pressure and such. This lead to him going from a tramp to a small time soldier to a polition as the head of a small political army to the Chancellor of Germany and finally, as its dictator. ...read more.

This essay has quite good knowledge of the time and there is some good relevant detail. However it is still really only a plan and not fully developed in places. Some times an essay is better if only key points are selected and explored rather than attempting, as this one does, to cover everything.
For the higher levels it is important to explain the links between the factors.