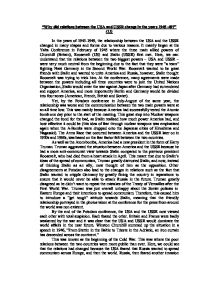 &quot;Why did relations between the USA and USSR change in the years 1945-49?&quot;

"Why did relations between the USA and USSR change in the years 1945-49?" (15) In the years of 1945-1949, the relationship between the USA and the USSR changed in many shapes and forms due to various reasons. It mainly began at the Yalta Conference in February of 1945 where the three main allied powers of Churchill (Britain), Roosevelt (US) and Stalin (USSR) first met. Here, we can understand that the relations between the two biggest powers - USA and USSR - were very much neutral from the beginning due to the fact that they were "a team" fighting Nazi Germany in the Second World War. Roosevelt wanted to be great friends with Stalin and wanted to unite America and Russia, however, Stalin thought Roosevelt was trying to trick him. At the conference, many agreements were made between the powers including all three countries were to join the United Nations Organisation, Stalin would enter the war against Japan after Germany had surrendered and support America, and more importantly Berlin and Germany would be divided into four zones (American, French, British and Soviet). ...read more.

Therefore, this caused him to introduce a "get tough" attitude towards Stalin, meaning that the friendly relationship portrayed in the photos taken at the conference for the press from around the world was non-existent. By the end of the Potsdam conference, the USA and the USSR now viewed each other with total suspicion. Each feared the other. Britain and France were badly weakened by the war and it was clear that the USA and USSR would dominate the world affairs in the near future. Winston Churchill summed up the situation in a speech in 1946, "From Stettin in the Baltic to Trieste in the Adriatic, an iron curtain has descended across the continent." This was known as the beginning of the Cold War. This was where the poor relations between the two countries were more public than ever. Here, we could see that the relations had changed because the USA feared that Russia wanted to spread communism across Europe, and then the world. Russia, then feared another invasion from the west and thought America wanted to dominate Europe and the world. ...read more.

Stalin was using some clever initiative because it would meant that if supplies could not be got to the people in Berlin, the French, English and especially the Americans would have to withdraw. Attempts to break the blockade could end in war (the Russians had far more troops on the ground). This lead America to the solution of airlifting supplies to Berlin which started in June over 318 days and put the ball back into Russia's court; she would have to fire the first shot. This forced Stalin to lift the blockade in May 1949. Due to the consequences of the Berlin Crisis, relations between America and Russia were worse than ever. NATO was formed which was a military alliance where if a member of the alliance was attacked, the others would help them. Made from Western countries such as America, Britain and Canada, it was more or less a military pact against Russia, influencing the poor relationship. Clearly then, the most important reason why relations changed between the USA and the USSR in the years 1945-1949 was because of the fact that each side mistrusted each other. They suspected each other of ambitions of world control that neither had. ...read more.