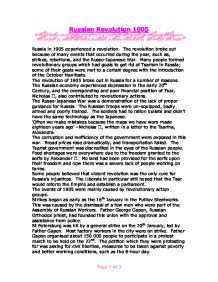 Why did revolution break out in 1905? Describe the events of the year and assess the degree to which the revolutionaries achieve their aim by the end of the year.

Russian Revolution 1905 Why did revolution break out in 1905? Describe the events of the year and assess the degree to which the revolutionaries achieve their aim by the end of the year. Russia in 1905 experienced a revolution. The revolution broke out because of many events that occurred during the year, such as, strikes, rebellions, and the Russo-Japanese War. Many people formed revolutionary groups which had goals to get rid of Tsarism in Russia; some of their goals were met to a certain degree with the introduction of the October Manifesto. The revolution of 1905 broke out in Russia for a number of reasons. The Russian economy experienced depression in the early 20th Century, and the overspending and poor financial position of Tsar, Nicholas II, also contributed to revolutionary actions. The Russo-Japanese War was a demonstration of the lack of proper guidance for Russia. The Russian troops were un-equipped, badly armed and poorly trained. The soldiers had to ration bullets and didn't have the same technology as the Japanese. ...read more.

The Tsar's troops were nervous when the march came near and responded with gunfire, killing several hundred people. 'It was quite clear the authorities had made a terrible mistake; they had totally misunderstood the intentions of the crowd...the workers went to the palace without evil intent' -Alexander Kerensky. This terrible and tragic event became known as 'Bloody Sunday'. The Tsar also lost his reputation of being the peoples' 'Little Father', they now called him 'Nicholas the bloody'. After Bloody Sunday peasants were encouraged by Social revolutionaries (SRs) to riot in the countryside and many landlords were murdered in the process. Liberals openly criticised the Tsar in the regional councils and published their complaints in illegal pamphlets. Terrorists assassinated hundreds of government officials including the Tsar's Uncle, Grand Duke Sergei, who was blown to pieces by an SR bomb. After a year of disturbances the Tsar gave way to revolutionary demands. He issued the October Manifesto, which gave Russia a constitution and stated basic civil liberties for all citizens. ...read more.

All the parties had the ultimate goal of politically overpowering the Tsar, but their minor goals made the parties contest against each other rather than work together against their main opposition, the Tsar. Therefore the Tsar and his government could restrain each party one by one. Clearly, the Tsar could not tolerate any extreme political groups that aimed to destroy his power. He used a group of secret police to handle the extremists. The secret police handled the revolutionary groups through imprisonment, execution or exile. This fact shows that many revolutionaries did not achieve their aims by the end of year. Russia was going through a difficult time in 1905 with the Tsar being in a poor financial situation. The revolution that broke out because of these difficulties brought about many strikes and protests against the Tsar. The revolutionaries only achieved their aim to a small degree by the end of the year, their biggest accomplishment being the October Manifesto. Many events contributed to revolution of 1905, and Russia had reached a tough stage at which it would take a long time to regain stability and true freedom amongst all again. ?? ?? ?? ?? Page 1 of 3 ...read more.