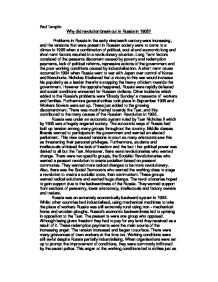 Why did revolution break out in Russia in 1905?

Paul Tamplin Why did revolution break out in Russia in 1905? Problems in Russia in the early nineteenth century were increasing, and the tensions that were present in Russian society were to come to a climax in 1905 when a combination of political, social and economic long and short-term factors resulted in a revolutionary situation. Long Term factors consisted of the peasants discontent caused by poverty and redemption payments, lack of political reforms, repressive actions of the government and the poor working conditions caused by industrialisation. A short-term cause occurred in 1904 when Russia went to war with Japan over control of Korea and Manchuria. Nicholas II believed that a victory in this war would increase his popularity as a leader therefore stopping the heavy criticism towards the government. However the opposite happened, Russia were rapidly defeated and social conditions worsened for Russian civilians. Other incidents which added to the Russia's problems were 'Bloody Sunday' a massacre of workers and families. Furthermore general strikes took place in September 1905 and Workers Soviets were set up. These just added to the growing discontentment. ...read more.

Russia was an extremely economically backward system in 1905. Whilst other countries had industrialised, using mechanical machines to take the place of workers Russia was still extremely rural using non- mechanical horse and wooden ploughs. Russia's economic backwardness led to uprising in opposition to the Tsar. The peasants were one group who opposed. Although being given freedom they had to pay for any land they received as a result of it. These redemption payments were the main source of the increasing anger. The tension increased and began to surface. There were many grievances of town workers at the time too. Working conditions were still awful despite Russia partially industrialising. When organisations were set up to prompt the improvement of conditions, they were commonly infiltrated by the secret police. This anger at the working conditions led to strikes just as it did in the countryside with the peasants rioting. All these groups shared one thing, there anger and grievances towards the Tsar. The Tsar heavily depended on the army and the secret to maintain his stability. There was to be no way of peaceful changes towards a more democratic system because of the Tsar's stubbornness. ...read more.

This discontent sparked on 9th January when, led by Father Gapon, a march of 150,000 walked to the Tsars palace where a petition was presented demanding higher wages, shorter working hours and free elections. When the marchers arrived at the palace troops opened fire killing over a hundred demonstrators. This day was known as "Bloody Sunday". This day has two immediate effects. The Tsar's reputation and label of being Russia's "Little Father" was destroyed. The second impact was that Bloody Sunday led to even more general strikes. The Russian revolution was not an immediate effect of "Bloody Sunday" but was an situation that had built up over a long period of time with long term effects. These were factors such as poor working conditions, peasant discontent, lack of political reforms and the government's repressive actions. However, there were also short-term causes that resulted in the revolution. The economic slump in Russia played a part in the revolution breaking out. The failure in the war against Japan was a huge turning point as the Tsar was already under a great deal of pressure and criticism. As a result of this war there were food shortages which led to even more opposition of the Tsar. ...read more.