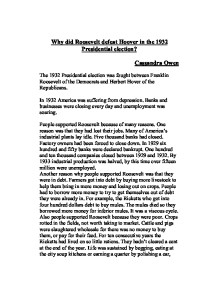 Why Did Roosevelt Defeat Hoover In the 1932 Presidential Election?

Why did Roosevelt defeat Hoover in the 1932 Presidential election? Cassandra Owen The 1932 Presidential election was fought between Franklin Roosevelt of the Democrats and Herbert Hover of the Republicans. In 1932 America was suffering from depression. Banks and businesses were closing every day and unemployment was soaring. People supported Roosevelt because of many reasons. One reason was that they had lost their jobs. Many of America's industrial plants lay idle. Five thousand banks had closed. Factory owners had been forced to close down. In 1929 six hundred and fifty banks were declared bankrupt. One hundred and ten thousand companies closed between 1929 and 1932. By 1933 industrial production was halved, by this time over fifteen million were unemployed. Another reason why people supported Roosevelt was that they were in debt. Farmers got into debt by buying more livestock to help them bring in more money and losing out on crops. People had to borrow more money to try to get themselves out of debt they were already in. ...read more.

He said he was waging a war against destruction, delay, deceit and despair. He showed something different to Hoover, who had said "Let events take their course." People were hungry, poor, in debt and homeless, Roosevelt offered them the help that they needed. He gave them hope. Hoover lost the election because he lost the confidence of many people. He made many mistakes. He was regarded as a 'do-nothing' president. He tried to restart the economy with tax cuts in 1930 and 1931 and to persuade business leaders not to cut wages. One of his schemes was to introduce tariffs on imported goods. This however, strangled the US industries and made the depression worse. In 1932 Hoover blocked the Garner-Wagner Relief Bill, which would have allowed congress to provide 2.1 billion dollars to create jobs. He believed that social security was not the problem of his government and he did little to help the people suffering from the effects of the depression. ...read more.

Roosevelt had a good track record as governor of New York. Roosevelt's policies to provide a 'safety-net' and to use the government's resources to pull the country out of economic depression appealed to the people. His confidence and warm character made him popular with the American people and he employed modern election tactics such as visiting the people and using the media. Roosevelt made the New Deal. In this he capitalised on the ideological shift from capitalism to communism and offered the people what they wanted. Although they were fed up with the republican government and were looking for an alternative, they didn't want to become completely communist, as they liked their old standards of living. Roosevelt worked very hard for his election victory in 1932. He understood the public opinion and capitalised upon it. If the Wall Street Crash and depression hadn't happened then Roosevelt probably wouldn't have been elected but he was only elected in 1932 because he successfully canvassed and acted on the opinions of the American people who were unhappy with the situation they were in, the way Hoover was leading their country and dealing with the depression. ?? ?? ?? ?? ...read more.