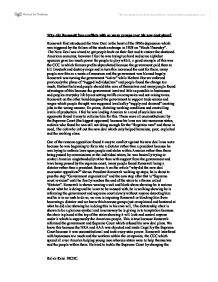 Why did Roosevelt face conflicts with so many groups over his New Deal plans?

Why did Roosevelt face conflicts with so many groups over his new deal plans?

Roosevelt first introduced the New Deal in the heart of the 1930s depression which was triggered by the failure of the stock exchange in 1929 on “Black Thursday”.

The New Deal was aimed to get people back on their feet and to restore the shattered American economy, however I feel he was trying too hard and some alphabet agencies gave too much power for people to play with it, a good example of this was the CCC in which farmers profits skyrocketed because the government paid them to kill livestock and destroy crops and in turn this increased the cost for them, many people saw this as a waste of resources and the government was blamed hugely. Roosevelt was turning the government “active” while Herbert Hoover enforced previously the phase of “rugged individualism” and people found the change too much, Herbert believed people should take care of themselves and many people found advantages of this because the government involved little as possible in businesses and peoples everyday life by not setting tariffs on companies and not raising taxes. Roosevelt on the other hand designed the government to support trade unions and wages which people thought was supposed levelled by “supply and demand” creating jobs in the wrong manner, fix prices, dictating working conditions and controlling levels of production. I feel he was leading America to a road of socialism and opponents found it easy to criticise him for this. These were all unconstitutional by the Supreme Court (the biggest opponent) because his laws ran into numerous states, radicals who found he was still not doing enough for the “forgotten men” and those in need, The rich who left out the new deal which only helped homeless, poor, exploited and the working class.

One of the reasons opposition found it easy to conflict against his new deal laws were because he was beginning to form into a dictator rather than a president because he was trying to enforce laws upon people and states within America rather than them being passed by commissions or the individual states, he was basically trying to control America singlehandedly rather than with support from the government and laws being passed by the supreme court, many people found Roosevelt being a dictator rather than a president. Source A on the article “why did the new deal encounter opposition?” shows President Roosevelt walking up steps, he is about to pass the step “Government organisation” and the new step after that is “Supreme court revision” until he finally reaches the end of the stairs to a throne called “dictator”. Roosevelt is shown wearing a suit and black shoes showing he is serious about what he is doing and he is not to be messed with, he is walking showing he is reforming the government and supreme court slowly without anyone detecting him and he is in no rush to do so, no-one is imposing Roosevelt or blocking him from becoming a dictator and we know this because groups just complained and bantered at what he did also showing he is doing this in his own will, The dictatorship chair is shown to be a glorious symbol and in someway he is giving in to temptation because the chair is placed at the top of the stairs showing it will look and control anyone under it which is supposedly the American people. This is true because Roosevelt reformed the government and Supreme Court which refused his new deal plans. We know this because the NRA and AAA was objected and made illegal by the Supreme Court because it was unconstitutional and took away state power. Roosevelt interfered with businesses too much and the workers within the companies, the CCC which spread all over America helping young men whereas states were to help themselves and the people within them. He tried to tackle the Supreme Court by changing the number of members within them from 15 to 19 who would be in favour of Roosevelt compared to the judges previously being conservative, even ordinary people and his close friends found this to be a terrible action by the president because most thought freedom should is ensured by politicians rather than judges interfering and people found his new deal laws therefore not an outcome of a long review but his views, opinions and the way America should be ran in his view.

The New Deal was still not doing enough to help the poor and oppressed, this was the belief of radicals like Father Coughlin, Dr Francis Townsend and Huey Long who were all key figures in the campaign to help those in need. I do not believe this was a strong cause for groups to conflict Roosevelt because Roosevelt helped the economy by the Banking act which secured banks and regained peoples trust in banks because banks were the main support line for businesses borrowing money and banks allowed companies to flourish and expand which was all on side of helping the American economy. The source of the Home owner loan agency is one example that not everyone was helped by the new deal, this was not a solution for those who were already homeless but for those who already owned a home, from my knowledge I know that helping the homeless was not one of Roosevelt’s biggest aim which the speech of Roosevelt’s inauguration speech, 1933 “Our greatest primary task is to put people to work”. This supports the radicals claim that the poor and oppressed were not being helped because they were majority most homeless. However in my view I do believe he did do a lot to help those in need who these people claimed he was not helping and one of Roosevelt’s pride achievements was the TVA, many jobs were created, he land was returned with water and soil became fertile again which enabled people to grow crop again whereas before soil was washed away, dried out by the sun and moved by the wind and this all way not in favour of farmers and as a result many farms were closed as a affect. It ran through 5 states including Tennessee helping many people. On the other hand, and example of were poor were given little relief was the CCC, young men aged 18-25 were given construction and conservation work, but were only paid one dollar a day. This source supports the fact that The New Deal put Americans in to work because in 1933( the year The New Deal was introduced) there was 24.9% labour force unemployed but this dropped to 21.7% the next year and dropped to 14.3% in 1937. This source shows that the New Deal was a success because it supports the fact that The New Deal put Americans back to work.

The rich and business owners felt they were cheated out of the New Deal because the rich were used by Roosevelt to fund his New Deal plans and they were outraged by it and Groups like National Labour Relations (Wagner) Act in 1935 and the Fair Labour standards Act of 1935 improved working conditions and pay of employees which managers had to pay for and fund. This was one of the reasons why the rich hated the New Deal and they felt like Roosevelt was rejecting his own kind of people because he was brought up in a wealthy family, some rich referred to rejection by Roosevelt as “betraying his own class”. This might have been a reason for the Supreme Court to oppose Roosevelt’s decisions because most judges were conservative by nature and wealthy just like Roosevelt.

The Blacks and Immigrants were definitely not the targets of the New Deal. They were previously the last to receive work in the depression and did basic low wage work left for scraps and still now blacks and immigrants were treated as second class citizens. The Agricultural Adjustment Act (1933) aimed to help farmers by cutting farm production and forcing up food prices. Less production meant less work for thousands of poor black sharecroppers. The blacks could not afford produce either and struggled like many Americans to make a living. WPA and the CCC did allow a 10% share to blacks who made up 10% of the overall population and 20% f the poor in America. Blacks did gain some economical and political advantages which whites did also receive. Eleanor Roosevelt did support these adjustments of Blacks and Immigrants. I do not believe they suffered much from the New Deal and received as much treatment from it as whites and it was not a big cause for groups to conflict with the New Deal.

In conclusion I think that the New Deal was neither a complete success
nor a complete failure because it did help many Americans regain jobs
and wages, but it also failed in some parts because some of the
alphabet agencies that FDR created to combat the problem of the
depression were declared unconstitutional which means they were ‘Not
in keeping with the basic principles or laws set forth in the
constitution of a state or country, especially the Constitution of the
United States.’ But the main reason it conflicted so much was because it was over the top and agencies like the TVA spread into 5 states, this was illegal by the Supreme Court and groups found it easy to conflict with the New Deal. I feel overall the deal saved America because in 1935 unemployment was at 10.6 million and it dropped to 10.4 million in 1935 which is a significant difference.