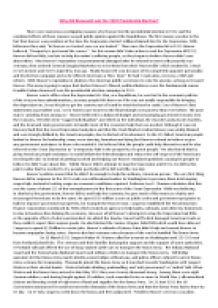 Why did Roosevelt win the 1932 Presidential Election?

﻿Why did Roosevelt win the 1932 Presidential Election? There were numerous overlapping reasons why Hoover lost the presidential election in 1932 and the combined effects of these reasons swayed public opinion against the Republicans. The first reason was due to the fact that Hoover was president at the time the Depression started; millions blamed him for the Depression. With bitterness they said, ?In Hoover we trusted; now we are busted.? Then once the Depression hit in 1929 Hoover believed, ?Prosperity is just round the corner.? For this reason didn?t take action to end the Depression till 1932; Hoover did too little, too late to help his nation?s suffering people, so they began to believe Hoover didn?t care about them. Also Hoover?s reputation was permanently damaged after he refused to meet with peaceful war-veterans, then ordered General Douglas MacArthur to evict them from their ?Hooverville? which resulted in 2 dead ex-servicemen and 1000?s injured by tear gas. Finally Roosevelt won because of his completely opposite personality and his election campaign and as he offered Americans a ?New Deal.? He had 3 main aims, recovery, relief and reform. With Hoover?s reputation in shatters, the American public were keen to vote for anyone, as long as it wasn?t Hoover. ...read more.

However all of Hoover’s attempts to stop the Depression had little or the opposite effect of what was intended. He added the Hawley-Smoot tariff which damaged American trade as they couldn’t export their surpass goods. He also blocked the Garner-Wagner Relief Bill which would have allowed Congress to spend £2.1billion to create jobs. Hoover’s attitude of Laissez-Faire didn’t help and caused Hoover to become unpopular; losing votes. Hoover also lost veterans votes because of the war he handled The Bonus Army. On 11 March 1932 Sargent Walter W. Waters called for a march on Washington and 250-300 men from Portland joined him. The veterans and their families had popular support and the support of some authorities. A Portland railroad offered the use of dung-stained cattle cars to transport the Bonus Army. The Indiana National Guard and the Pennsylvania National Guard used military vehicles to transport the Bonus Army. Toll bridge operators let the Bonus Army march silently across bridges without pay, and police officers refused to arrest Bonus Army veterans for trespassing. Thousands joined the Bonus Army as it marched towards Washington with Sargent Waters as their elected leader. Waters forbade drinking, panhandling, and ‘anti-government’ or ‘radical’ talk. ...read more.

He worked to provide old age pensions, help for farmers and unemployment relief; he spent $20million to achieve his aims. A majority of the voters believed that FDR?s plan to alleviate the Depression more actively addressed the issue than President Hoover?s plan. FDR made people feel more confident about their financial future; he believed his main task was to improve life for ordinary people. Roosevelt believed in the ?forgotten? people - the unemployed, the homeless and hungry ? who voted Roosevelt into office in the 1932 election. In conclusion, there were many reasons why FDR won the 1932 presidential election but the root cause was Hoover?s unpopular policies. His flawed policies led to him not helping America?s people which damaged his reputation and lost him the election by 7 million votes. Whilst Roosevelt?s election campaign contributed to his victory, he was helped enormously by Hoover making himself unpopular by making mistake after mistake and then not owning up to it. He never apologised for not helping the poor during the Great Depression, he didn?t apologise for injuring and killing American veterans; he called them communists instead. Hoover wasn?t prepared to change his policies and ideas even though America was changing around him. His policies simply weren?t designed to work during a Depression and Roosevelt?s policies were. ...read more.