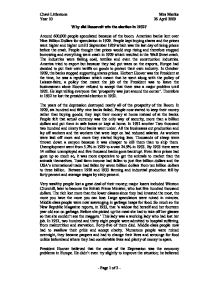 Why did Roosevelt win the election in 1932?

Why did Roosevelt win the election in 1932?

Around 600,000 people speculated because of the boom. American banks lent over Nine Billion Dollars for speculation in 1929. People kept buying shares and the prices went higher and higher until 3 September 1929 which was the last day of rising prices before the crash. People thought that prices would stop rising and therefore stopped borrowing and everything went crash in 1929 which resulted in the Wall Street crash. The industries were failing coal, textiles and even the construction industries. America tried to export but because they had put taxes on the exports, Europe had decided to put their own tariffs on goods to protect their own industry. In October 1929, the banks stopped supporting shares prices. Herbert Hoover was the President at the time, he was a republican which meant that he went along with the policy of Laissez-faire, a policy that meant the job of the President was to leave the businessmen alone Hoover refused to accept that there was a major problem until 1932. He kept telling everyone that ‘prosperity was just around the corner’. Therefore in 1932 he lost the presidential election in 1932.

The years of the depression destroyed nearly all of the prosperity of the Boom. In 1929, six hundred and fifty nine banks failed. People now started to keep their money rather than buying goods; they kept their money at home instead of at the banks. People felt that actual currency was the only way of security, more than a billion dollars and put them in safe boxes or kept at home. In 1931 another Two thousand two hundred and ninety four banks went under. All the businesses cut production and lay off workers and the workers that were kept on had reduced salaries. As workers were laid off more and more they started buying less. Thousands of sheep were thrown down a canyon because it was cheaper to kill them than to ship them. Unemployment went from 5.2% in 1929 to a vast 24.9% in 1933. By 1933 there were 14 million unemployed and five thousand banks gone bankrupt. Even farm prices had gone up so much so, it was more expensive to get the animals to market than the animals themselves. Total farm income had fallen to just five billion dollars and the USA’s international trade had fallen by seven billion dollars from ten billion dollars to three billion.  Between 1928 and 1933 farming and industrial production fell by forty percent and average wages by sixty percent.

Very wealthy people lost a great deal of their money; major losers included Winston Churchill, later to become the British Prime Minister, who lost five hundred thousand dollars. The rich lost more than the lower classes since they had invested the most, the more you have the more you can lose. Large speculators were ruined in minutes. Middle class people were now scavenging in garbage heaps for food. So much so the New Republic Magazine reports, in 1933, that ‘a widow fed herself and her fourteen year old son on garbage. Before she picked up the meat she had to take off her glasses so that she couldn’t see the maggots.’ This lady was a working lady who had lost her job. In 1931, two hundred and thirty eight people were admitted to hospital suffering from malnutrition and starvation. Forty-five of them died. Middle-class people now had to swallow their pride and accept charity. Numerous people were ruined overnight, they became paupers and had to change their lives and scrounge for food unlike beforehand where they had comfortable lives and plenty of money to spare.

President Hoover believed that the cause of the Depression was the economy problems in Europe. He didn’t even try slightly to improve the situation; he believed that business had its ups and downs. He could, and should, have provided relief but he chose to block the Garner - Wagner Relief Bill this could have allowed the congress to provide 2.1 billion dollars and create jobs. The republicans believed that if local governments provided relief to individuals they would become less independent. When Roosevelt came along he showed that he believed strongly in an active government. Because Hoover was regarded as a ‘do nothing’ President it wasn’t very hard to elect him out of office. Roosevelt promised that he would help the Americans get back jobs to protect they’re savings and property. He also promised to provide relief for the sick and to get the industry and agriculture back on their feet. When he won it was unsurprisingly the worst defeat the Republicans ever had.

In conclusion, we have shown that Hoover did nothing in the depression and therefore earned the publics scorn and therefore when Roosevelt came with his promises to bring the country out of the Depression, the people wanted him more and he won by seven million votes.