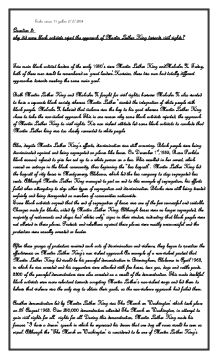 Why did some black activists reject the approach of Martin Luther King towards civil rights?

discrimination and violence, they began to question the effectiveness on Martin Luther King's non violent approach An example of a non-violent protest that Martin Luther King led would be his peaceful demonstration in Birmingham, Alabama in April 1963, in which he was arrested and his supporters were attacked with fire hoses, tear gas, dogs and cattle prods. 3300 of the peaceful demonstrators were also arrested as a result of the demonstration. This made doubtful black activists even more reluctant towards accepting Martin Luther's non-violent ways and led them to believe that violence was the only way to obtain their goals, as the non-violence approach had failed them. Another demonstration led by Martin Luther King was The March on Washington' which took place on 29' August 1963. Over 250,000 demonstrators attended The March on Washington, in attempt to gain civil rights for all. rights for all. During this demonstration, Martin Luther King made his famous "I have a dream" speech in which he expressed his dream that one day all races would he seen as equal. ...read more.