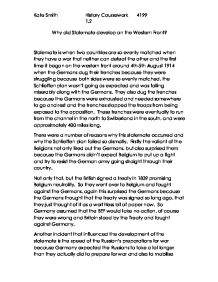 Why did Stalemate develop on the Western Front?

Why did Stalemate develop on the Western Front?

Stalemate is when two countries are so evenly matched when they have a war that neither can defeat the other and the first time it began on the western front around 4th-5th August 1914 when the Germans dug their trenches because they were struggling because both sides were so evenly matched, the Schlieffen plan wasn’t going as expected and was failing miserably along with the Germans.  They also dug the trenches because the Germans were exhausted and needed somewhere to go and rest and the trenches stopped the troops from being exposed to the opposition.  These trenches were eventually to run from the channel in the north to Switzerland in the south, and were approximately 400 miles long.

There were a number of reasons why this stalemate occurred and why the Schlieffen plan failed so dismally.  Firstly the valiant of the Belgians not only tired out the Germans, but also surprised them because the Germans didn’t expect Belgium to put up a fight and try to resist the German army going straight through their country.

Not only that, but the British signed a treaty in 1839 promising Belgium neutrality.  So they went over to Belgium and fought against the Germans, again this surprised the Germans because the Germans thought that the treaty was signed so long ago, that they just thought of it as a worthless bit of paper now.  So Germany assumed that the BEF would take no action, of course they were wrong and Britain stood by the Treaty and fought against Germany.

Another incident that influenced the development of the stalemate is the speed of the Russian’s preparations for war because Germany expected the Russians to take a lot longer than they actually did to prepare for war and also to mobilise towards Germany to attack so the Germans went over to the western front to fight France expecting to only have one battle on their hands at one time, but to their surprise, the Russians were prepared and invading Germany on the 17th while they were on the western front.  As a result of this, Germany had to split their army so they had two wars on simultaneously and only half of their army fighting each one.  The main floor in the plan was the weakness in the western front.

The German advance across Belgium was held up briefly by the BEF at Mons on 23rd August.  The British then departed to the southern front to help the French and give the Germans a lesser chance of defeating the French.  Because of the delayed advance of moving across Belgium, the French had more time to transfer more and more troops from Alsace-Lorraine.  The Germans didn’t expect the French to have the ability to do this because they didn’t expect getting delayed by Britain and Belgium.  Therefore, by the time the Germans finally got to France, the French were already there and prepared, expecting them, they were also less tired because they were already there, they could have had a rest while waiting for the Germans.  The Germans did finally get into France with success, however on their way they lost quite a few of their troops and were therefore lacking troops which they needed, subsequently, they were forced to retreat and they failed to capture the French capital.  Also, the French were a lot healthier and had more reinforcements than the Germans.

The Germans were advancing slowly because of all the unexpected delays and extra wars which they were not necessarily prepared for.

The inspiration of the French resistance was General Joffre, because he quoted “a unit which can no longer advance must at all costs retain the ground it has gained and rather than retire, be killed on the spot”.  This quote inspired the French to fight and do all they possibly could to hold Germany, no matter what it took.

Frome the 5th-9th September, the extremely exhausted Germans were thrown back from the river Marne; they were so tired but they had to keep going because if they didn’t form some kind of defence, they would all be shot and they would lose the war.  So they decided to start to dig trenches so they had somewhere that they could go and where they were safer on the fields.

The defeat of Germany was extremely vital because it temporarily stopped a potential horrific danger to them becoming an actual danger.