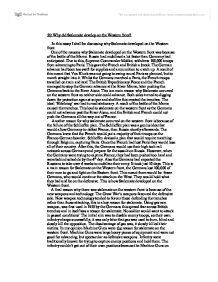 Why did Stalemate develop on the Western front?

1b) Why did Stalemate develop on the Western front? In this essay I shall be discussing why Stalemate developed on the Western front. One of the reasons why Stalemate developed on the Western front was because of the battle of the Marne. Russia had mobilized a lot faster than Germany had anticipated. Due to this, Supreme Commander Moltke, withdrew 100,000 troops from advancing to Paris. This gave the French and British a break. The German advance had been too swift for supplies and ammunition to catch up. A result of this meant that Von Kluck was not going to swing round Paris as planned, but to march straight into it. Whilst the Germans marched o Paris, the French troops travelled on train and taxi! ...read more.

The Germans knew that the French would put a majority of their troops on the Franco-German boarder. Schlieffen devised a plan that would require marching through Belgium, capturing Paris. Once the French had lost Paris they would lose all of their country. After this, the Germans would use their high tech rail network across Germany and prepare for the assault on Russia. However, when the Germans were trying to capture France, they had been pushed too hard and were behind schedule by the 4th day. Also the Germans had expected the Russians to take over 6 weeks to mobilize their army. It took just 10 days. This is a main reason for Stalemate on the Western front, the Germans lost 100,000 of their men to go and fight on the Eastern front. ...read more.

The disadvantage of gas was, it slowly killed their victims. In my opinion Machine Guns were the reason for stalemate on the western front. Machine Guns were large heavy pieces of equipment and were not good for advancing, but spectacular as defensive weapons. Infantry were traditionally known for trying to capture enemy positions and hold them. The infantry couldn't get out of their own positions because the Machine Guns on either side of the trenches would mow a battalion of men down in minutes. The Vickers MG could fire over 8 bullets a second. The Machine Gun is most well known from its work against the British in The Battle of the Somme. The machine gun proved fatal, it stopped infantry going over the top and advancing. Instead a single machine gun could wipe out an entire battalion. ...read more.