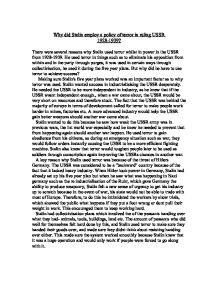 Why did Stalin employ a policy of terror in ruling USSR 1928-1939? There were several reasons why Stalin used terror whilst in power in the USSR from 1928-1939. He used terror in things such as to eliminate his opposition from within and in the party through purges, it was used in certain ways through collectivisation, he used it during the five year plans. But why did he have to use terror to achieve success? Making sure Stalin's five year plans worked was an important factor as to why terror was used. Stalin wanted success in industrialisising the USSR desperately. He needed the USSR to be more independent in industry, as he knew that if the USSR wasnt independent enough., when a war came about, the USSR would be very short on resources and therefore stuck. The fact that the USSR was behind the majority of europe in terms of development called for terror to make people work harder in mines, factories etc. A more advanced industry would help the USSR gain better weapons should another war come about. ...read more.

Therefore, to do this he intimidated the workers by show trials, which showed the public what happens if they put a foot wrong or dont pull their weight in work. This encouraged them to keep working hard. Stalin had collectivisation plans which involved the of the peasants handing over what they had- animals, tools, buildings, land etc. The amount of peasants who did well for themselves felt hard done by this, and Stalin used terror to make sure they handed their goods over, and made sure they didnt think about resisting handing over either. This made sure the system worked smoothly because Stalin knew that it was a huge operation and would only work if people were forced to go along with it. Stalin also used terror just because of the plain fact that he wanted his country to be rich and prosperous quickly. Because the Bolsheviks believed in communism, this means no matter how hard you work, you can be as wealthy as anyone else. Stalin wanted people to know that slacking is not acceptable and they cannot get away with it. ...read more.

Stalin was bought up harshly when he was a child, within the space of 11 years he was arrested and exiled to Siberia 8 times, he carried out bank robberies, even the prisoners gave him his name- man of steel. This meant Stalin was well known as a "hard" man, which means that he had certain flaws which made him inflict terror possibly because he wanted people to feel his pain, or he wasnt aware of the evil in what he was doing- after all, we know that Stalin was treated harshly as a boy, so terror was just a normal thing to him, even if it was on a smaller scale. In conclusion, Stalin used terror for a number of important factors which link to each other. However, the most important factors were the 5 year plans, combined with Stalins "hardman" personality. This is because Stalin used terror to make his ideas work as he didnt know any other way. He knew that he wasn't a very charismatic politician, and he also knew that he couldnt think up any other way to make his ideas work,although he used methods such as awards for so he used his hardman persoanality and used thuggish tactics to get what he was hoping to achieve. ...read more.