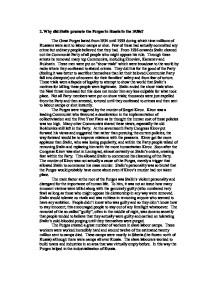 Why did Stalin promote the Purges in Russia in the 1930s?

2. Why did Stalin promote the Purges in Russia in the 1930s? The Great Purges lasted from 1934 until 1938 during which time millions of Russians were sent to labour camps or shot. Few of these had actually committed any crime but ordinary people believed that they had. From 1936 onwards Stalin cleaned out the Communist Party of all people who might oppose his rule. Through these arrests he removed many top Communists, including Zinoviev, Kamenev and Bukharin. These men were put on "show trials" which were broadcast to the world by radio where they confessed to absurd crimes. They did this for the good of the Party (feeling it was better to sacrifice themselves than let their beloved Communist Party fall into disrepute) out of concern for their families' safety and from fear of torture. These trials were a fa�ade of legality to attempt to show the world that Stalin's motives for killing these people were legitimate. ...read more.

This allowed Stalin to commence his cleansing of the Party. The murder of Kirov was not actually a cause of the Purges, merely a trigger that allowed Stalin to commence his mass murder. Stalin's personality was so brutal that the Purges would probably have come about even if Kirov's murder had not taken place. The main factor at the root of the Purges was Stalin's violent personality and disregard for the importance of human life. To him, it was not an issue how many innocent victims were killed along with the genuinely guilty (who numbered very few) as long as those who might oppose his dictatorship in any way were removed. Stalin would tolerate no rivals and was ruthless in removing anyone who seemed to have any ambition. People didn't know who was guilty and so they didn't know how to stay innocent; this encouraged people to stay out of any limelight whatsoever. The removal of the so-called "guilty", often in the middle of night, was done so secretly that people tended to believe that they actually were guilty and carried on tolerating Stalin's cold-blooded purging until they themselves were purged. ...read more.

It is unlikely that Stalin would have been allowed to pursue his purging policy without the cooperation of the Russian people. There were fanatics who supported every move of his and others who used purging to their advantage. Russians reported on their neighbours and associates to settle old grudges and to gain promotion. Those informing on their superiors often were appointed into their jobs and this allowed Stalin to develop a cult of devoted employees around him. Others tolerated the Purges out of support for communism; they saw the NEP as a retreat from communism and agreed with the principal of collectivisation and the Five Year Plans, seeing them as the way to move Russia forward. Stalin's brutal, vicious character was the main reason why the Purges took place and definitely the crucial factor. The purging of such large numbers complemented the strict system of control in Russia and at the same time provided millions of slave-labourers. The trigger to the dreadful events was Kirov's murder but they would not have been on such a large scale if the Russian people themselves had not joined in with them. ...read more.