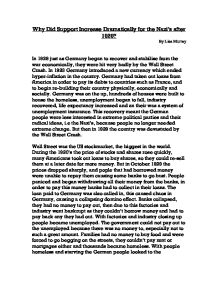 Why Did Support Increase Dramatically for the Nazi's after 1929?

Why Did Support Increase Dramatically for the Nazi's after 1929? By Lisa Murray In 1929 just as Germany began to recover and stabilise from the war economically, they were hit very badly by the Wall Street Crash. In 1923 Germany introduced a new currency which ended hyper-inflation in the country. Germany had taken out loans from America in order to pay its debts to countries such as France, and to begin re-building their country physically, economically and socially. Germany was on the up, hundreds of houses were built to house the homeless, unemployment began to fall, industry recovered, life expectancy increased and an their was a system of unemployment insurance. This recovery meant the German people were less interested in extreme political parties and their radical ideas, i.e the Nazi's, because people no longer needed extreme change. But then in 1929 the country was devastated by the Wall Street Crash. Wall Street was the US stockmarket, the biggest in the world. During the 1920's the price of stocks and shares rose quickly, many Americans took out loans to buy shares, so they could re-sell them at a later date for more money. ...read more.

The Reichstag was made up of 500 members who were voted in by the German people. Each party won seats depending on the amount of votes they got, this is called "proportional representation". But this meant that one party never got a majority of the seats, and so the parties were forced to form coalitions in order for decisions to be made. This was a major weakness because coalitions were weak, although two parties may agree on some things they would disagree on others, meaning coalitions were short lived. This made it very difficult for the Reichstag to make decisions and they could not come to any conclusions on how to solve Germany's depression. So after 1930 the president had to rule by decree, the Reichstag members couldn't even agree on a government. The government was totally unstable, the politicians failed to sort out the unemployment crisis, and a economic policy they drew up failed. Germany needed leadership but they didn't get it. As the German government fell to pieces the voters turned to extremist parties who promised radical change, at this time the Germans needed change, they needed a government who could pull them out of the depression and change Germany's economic crisis. ...read more.

With thousands of Germans starving and homeless they dsperatly wanted an end to unemployment, which the Reichstag government had failed to give them, the Nazi's however promised that they would end it and many Germans would have voted for the Nazi's to see this happen. Also the Nazi's were the strongest anti-communist party in the country. Many Germans, especially landowners, and businessmen were fearful of a communist takeover. The communists were also an extreme party, who would also be taking advantage of the depression and getting more voters, as they too promised change. Therefore those who opposed communism voted for a strong anti-communist party in hope that it would beat the communist party. And so they looked towards the Nazi's who were a popular, strong anti-communist party. And so in the 1930's they were able to get more and more votes from people who were suffering from the depression and wanted change and an end to unemployment, from people who disliked the democratic system because they believed it had failed them, and from those who feared a communist takeover this was because the Nazi's offered strong leadership, an end to democracy and unemployment, and they were a strongly anti-communist party. ...read more.