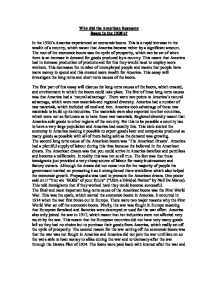 Why did the American Economy Boom in the 1920's?

Why did the American Economy Boom in the 1920's? In the 1920's America experienced an economic boom. This is a rapid increase in the wealth of a country, which meant that America became richer by a significant amount. The root of the economic boom was the cycle of prosperity, which can be set of when there is an increase in demand for goods produced by a country. This meant that America had to increase production of products and for this they would need to employ more workers. This decreases the number of unemployed people and means that people have more money to spend and this created more wealth for America. This essay will investigate the long-term and short-term causes of the boom. The first part of this essay will discuss the long-term causes of the boom, which created, and environment in which the boom could take place. The first of these long-term causes was that America had a 'natural advantage'. There were two points to America's natural advantage, which were raw materials and regional diversity. ...read more.

This was the spark, which started the economic boom in America. It occurred in 1914 when the war first broke out in Europe. There were two major reasons why the First World War set off the economic boom. Firstly, the war was fought in Europe meaning that European farmland and factories were destroyed or used for the war effort. America also only joined the war in 1917, which meant that her industries were not affected very much by the war. This meant that the European countries did not have very many goods left so they had no choice but to purchase their goods from America, which really set off the cycle of prosperity. The second reason for the war setting off the economic boom was that the war was not fought in America and America did not join the war until late on so the were able to loan money to allies during the war and to Germany after the war through the Dawes Plan of 1924. The loans were paid back with interest after the war and they made America even wealthier. ...read more.

Many Americans invested a lot of money in stocks and shares and this provided extra finance for industry and meant that businesses could expand and prosper even further. Advertising was one of the more important short term causes of the American boom as without a lot of advertising not as many goods would have been sold and then the economy would not have grown so much. Advertising was used to convince Americans to go out and buy certain products and make people feel dissatisfied if they did not own the product. People worked harder to get more money so they could buy more goods. In conclusion to this essay the most important cause of the American boom was World War One because this allowed America to first start getting stronger by loaning high amounts of money to other countries who could actually be bothered to fight in the war. However without Americas natural advantage the boom could never have been possible. The American dream was also important because people wanted to work hard to try to become rich. I think that all of the long-term causes were the most important causes of the economic boom America experienced in the 1920's. ...read more.